After a bout of illness forced me to languish on the couch for several days, I was delighted to discover Netflix, God bless ’em, had added the  first series of  Masterpiece Theater‘s Downton Abbey to their instant queue.   And, Glory Hallelujah,  what a brilliant production! 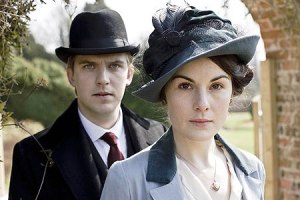 Superbly written and cast, the series unfolds amid  spectacular historic settings worth viewing for that aspect alone, but you don’t have to hang on simply for the view,  Downton Abby has an intriguing plot and subplots.  More than intriguing, addictive!

The story is set against a society undergoing rapid alteration from the formal Edwardian Era to a  more modern one (1912-1914).  And I’d recently researched the early 20th century for the flashback/time travel element in my completed (as of last week) light paranormal romance Somewhere The Bells Ring.  So, Downton Abbey was perfectly timed for my interests. 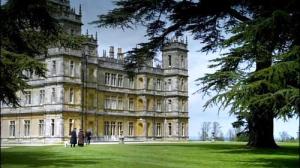 This series opens with the sinking of the Titanic and explores how the loss of the heir to the estate and the arrival of the new heir apparent affects the fate of the family living at Downton Abbey, one of the most magnificent English homes I’ve ever seen.  Can you imagine actually living in such a place?  Boggles the mind.  Of course the highborn family take it for granted.

The lives of the servants are a major part of the story and interwoven with those of the gentry who depend on their staff…maids, footmen, butler, housekeeper, valet…to do everything for them, and this is back in the day when one dressed formally for dinner.   Every facet of his lordship’s daily regimen, and that of the ladies of the household, was to be exacted with absolute correctness and the house run like a well oiled machine.

Only it’s not a machine.  As this series takes pains to portray, these are real people with real wants, needs, wishes…and a new age is dawning when the staff  have increasingly more options than remaining in service.  Downton Abbey depicts these social evolutions, including the movement for womens’ rights and the vote.  Nothing vital to that era is overlooked.  I’m wowed by the terrific job everyone responsible for this production did, a fresh twist on another much loved series, Masterpiece Theater’s Upstairs Downstairs.

As I suspected, Downton Abbey ended with the beginning of World War One, and I expect the Great War will feature prominently in the next series which I eagerly anticipate.  I could just watch the show on tv, but if I wait until the new series is concluded and uploaded in its entirety to Netflix I can view episode after episode without having to wait until the next week.  So, until then…