“Who You Gonna Call?”

While recovering from health issues, I’ve watched a lot of shows on YouTube–too many. But I’ve learned more about Near Death Experiences, Miracles, Big Foot, and various Paranormal Occurrences. One of the shows I got sucked into is A Haunting, a tad over the top–to put it mildly–but interesting.

A particularly unsettling episode is the first one they opened with–Hell House. They hit the ground running!

Plot summary: ‘Three ghosts and one demon harass the terrified Beckwith family when they move into a 19th century Connecticut house.’

Question: I’m puzzled as to why it took the mother (who seemed to call the shots) so long to seek help with their violently dark demonic home? However, I’ve wondered that about the people in every episode I’ve seen. A single night of terror would have me calling in a priest/spiritual person(s), and paranormal experts, plus loudly singing hymns and praying…pouring salt around each room, cleansing with sage…if I’m still in the house. Doubtful. ‘Here’s my number, dudes. Give me a call when you have the place habitable.’

What about you? Made of sterner stuff? Remember, we’re dealing with a demon. 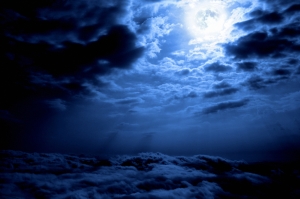 That’s awesome. I’m guessing her initial lack of belief in anything delayed her pleas for assistance, but the happenings in that house are crazy scary. From the intro, the eldest of the two teenage daughters had a bad feeling and man, was she right. Soon after moving in, the Beckwith’s young son came under attack with bangs, rattling, darting black shadows, an unseen presence tearing off his blanket and calling his name… The freaked out boy woke up screaming every night. I can’t imagine the child still slept alone in his room. My kids would have bunked in with me and hubby, or the car, with the dogs. 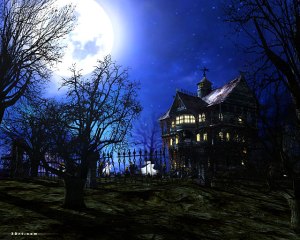 The Beckwith’s younger teenage daughter was next, with the sensation of a fist coming through her mattress. Bonnie called a family meeting where each member shared their experiences and it became clear something was off, so she called Ed and Loraine Warren, famous for their research into the paranormal, the Amityville Horror, plus, plus. They advise the family to take pictures and collect more evidence. This will help the Warrens know what they are dealing with. I could make a wild guess, but it’s Thanksgiving and they shelve the ghostly situation for now (assuming you can).

When the kind grandmother visits for T-day she’s confronted by a trio of spirits in her bedroom which sends her scrambling for home. Poor woman. The Warrens return after the holiday with paranormal assistants. One alarmingly possessed psychic mindlessly scribbles a sinister ‘Get out!’ message.

Done. Send this to me via postcard.

At one point, the entire paranormal group appear possessed. Creepy. They learn an enraged demon controls the three normally mild spirits and is the source of the horror.

Would you believe it gets worse?

It occurs to Bonnie to research the home’s history and visit old graves to discover who once lived there. Time to call in a priest to cleanse the house. At first, it seems a success, until Bonnie becomes obsessed with drawing images and channels a female spirit. The house cleansing is not a done deal. Paranormal activity revs up and the family camp out together in one room. (That would have happened here after day one.) But books and other objects fly at the sleepers. 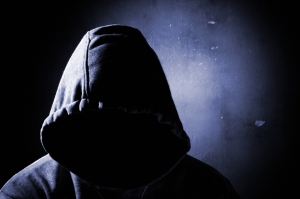 Enough already! Bonnie again summons the Warrens and recalls the priest, who is preparing himself spiritually for his next attempt. However, Christmas is upon them. Not a jolly one.

Lorraine Warren tells the family there’s no escape, they must stay and fight. Apparently, badness could follow them. I don’t know why obsessed ghosts would leave their home to go after them, but I guess the demon dude might. He’s easily entertained.

When that poor grandmother comes back to bring some holiday cheer, she’s instantly stricken by a high fever and irregular heartbeat. We next see her in a hospital bed with her rosary reciting her prayers backwards, and that’s not easy to do. Something’s amiss. Then the oldest daughter is in a car wreck while out running errands. This has got to stop, Bonnie insists, or something to that effect.

Agreed. Here’s where I invite the fire department to burn the house down, while taking up residence with the exorcist. Maybe the air force wants to use the place for target practice. Then we bring in buckets of holy water and douse the rubble while a choir sings sacred songs and…

Not to panic! The sorely tried priest returns, his mission clear, with a medium, to enact another cleansing. The tormented medium is again possessed, while heavily restrained, and the priest battles to banish the highly resistant demon. Success! Finally.

The family decide to call it and live there with the three milder spirits. They dwell together peacefully for several years, UNTIL excavators near the home inadvertently disturb an ancient Indian burial ground. Never a good idea. And we’re off to the races!

Now what? It doesn’t really say. I wasn’t that impressed with the Warrens. The priest and the medium were the ones who achieved success and may have had to return a third time. These events took place years ago, and I don’t know how the family fare. Unmolested, I hope. The children probably fled.

Back to me. I’ve written mystery romances with a ghost or two and strong historical/fantasy element. I’ve mixed spirits into my time travels…doing that in my WIP. If/when I get it finished, you can expect a super story, I add modestly.

For more on my ghostly tales, please visit my Amazon Author page and explore Somewhere My Love, Somewhere My Lady, The White Lady, Somewhere the Bells Ring and Traitor’s Curse. Except for Somewhere My Love, these books are published by the Wild Rose Press and also available at all major online booksellers. As ever, I need reviews. If interested please message me here or at bctrissel@yahoo.com

***It’s possible this old farmhouse is a bit haunted, but it’s a happy house, like a favorite blanket. The Shenandoah Valley has a high level of paranormal activity. I don’t think most ghosts are violent or dangerous.