Christmas is a time when you get homesick — even when you’re home. ~Carol Nelson

As evident from this family photo of me and my three siblings, I was a big Christmas lover as a kid. ***Note. Hum Somewhere in My Memory from Home Alone as you read this.

From age three until not quite six, I lived in Taiwan with my parents and younger brother, John, where my mom and dad taught English at Tunghai University. Christmas gifts were hand-me-downs from other Missionary families, which John and I were ecstatic to receive. We knew no better than gently used toys, until our family returned to America and we discovered modern toy stores, television, and were bombarded with commercials. The stupendous merchandise wowed us, and we were ardent believers in everything Christmas.

My grandmother, called Mommom, prepared for the big day all year long and was a devotee of the holiday. She made Christmas a mystical blend of the Nativity and Santa Claus, which worked for me. The generous old guy in the red suit was equally devoted to Christmas and a great boon to a family with limited funds. However, I learned Santa could be touchy and kept a naughty list. I hoped he had absentmindedly omitted my name. Fortunately, I also learned the Christ Child forgave sins, and prayed Jesus gave Santa a heads-up on the forgiving Beth thing. A miracle transpired because I never got switches in my stocking as my ancestral Uncle Gus was said to have done. That horrifying tale struck fear into his descendants, and I was super good those last few days before Saint Nick’s timely arrival.

Visiting Mommom and my aunt, uncle, and five cousins at the old Virginia homeplace for Christmas was like being part of a Hallmark movie. Nothing could match the wonder I experienced there as a child. My uncle even reported seeing reindeer hoof prints in the snow on the roof, and one year a jovial neighbor dressed up as Santa–I recognized him– came to the house to delight us kids. I was concerned this facade might offend the REAL guy, and he’d stay away. But we heard the sleigh bells out in the meadow, as we did each Christmas Eve. The warning jingle sent us scrambling to bed before Santa’s arrival, and inspired the title of my holiday romance, Somewhere the Bells Ring. The home in this ghostly time slip Christmas romance was also inspired by the homeplace pictured below. Built in 1816, Chapel Hill, as it’s called, has been in the family for generations and is where I spent some magical holidays. 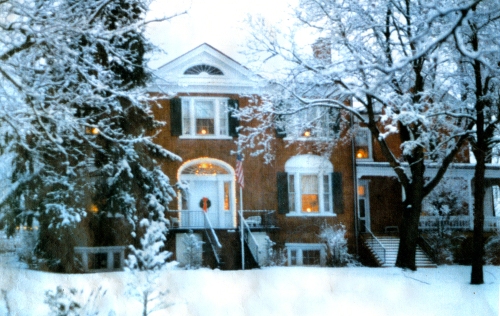 With such fantastic childhood memories, Christmas as a bigger kid/adult was a bit of a letdown. Maybe it is for everyone. Christmas really belongs to children, but I still cherish it in my heart. As Scrooge says after hard lessons learned, “I will honor Christmas in my heart and try to keep it all the year.” And so I do.

My mantle is perpetually decorated with angels and lights. Also a Dalek Supreme and the Tardis…a little random, I suppose. Still, it’s festive year round. The holidays can be rather overwhelming. I try to keep our celebration simple but fun, especially for the small people in my life. I truly must love Christmas because I’ve written three romances with the holiday as a central theme and I’m pondering a fourth. Maybe with an angel in the story…I love angels. But not the weeping kind, thanks to the creepy ones in Doctor Who. 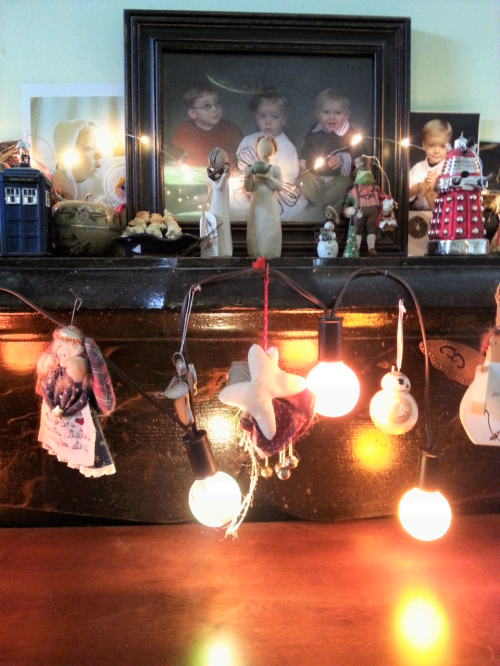 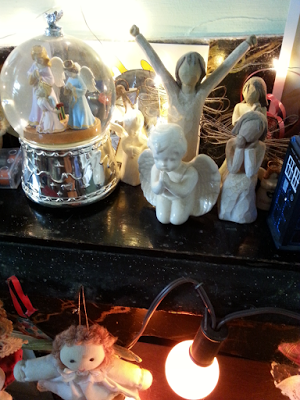 Several years ago, my mother found a number of vintage Christmas cards in an old trunk. This marvelous find took us on a trip down memory lane, back to people who lived before I was born. I’m terrible about remembering to send cards, but these are great. I may have shared some of them before, but here’s another look at a few. 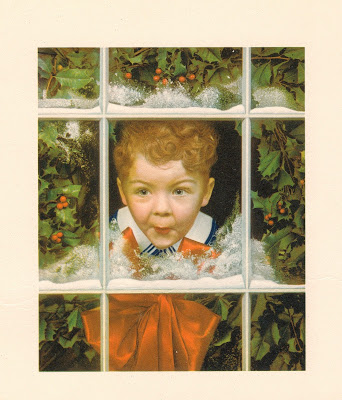 (Vintage Santa and a Norman Rockwell print on cards among Mom’s finds.)

December 1968: Caught with pot in her dorm room, Bailey Randolph is exiled to a relative’s ancestral home in Virginia to straighten herself out. Banishment to Maple Hill is dismal, until a ghost appears requesting her help. Bailey is frightened but intrigued. Then her girlhood crush, Eric Burke, arrives and suddenly Maple Hill isn’t so bad.  To Eric, wounded in Vietnam, his military career shattered, this homecoming feels no less like exile. But when he finds Bailey at Maple Hill, her fairy-like beauty gives him reason to hope–until she tells him about the ghost haunting the house. Then he wonders if her one experiment with pot has made her crazy.
As Bailey and Eric draw closer, he agrees to help her find a long-forgotten Christmas gift the ghost wants. But will the magic of Christmas be enough to make Eric believe–in Bailey and the ghost–before the Christmas bells ring?~
I really think Hallmark is waiting for me with this story.

From Romancing the Book: “Ms. Trissel captivates her reader from the moment you start reading the first page. She has written a compelling love story that spans some fifty plus years and keeps you entertained every step of the way with the story within a story…I fell in love with her characters and look forward to the next delightful story ready with Kleenex box in hand. A must read for every romance fan.” ~Reviewed by Robin

Somewhere the Bells Ring is available in eBook from all online booksellers. Plus a smashing new audio version from Audible is out at Amazon. For the kindle and audio visit:

(Tag from the earlier 20th century) 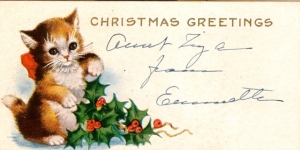 My new release, fantasy time travel Christmas romance The White Lady is featured at different blogs for the next few weeks. Enter the rafflecopter for a chance at the 20$ Amazon gift card. I’m a few days behind in sharing the stops The blog tour began at the excellent site:  Romance Novel Giveaways

For today’s stop and a list of blogs taking part in the tour visit: http://bookschatter.blogspot.co.uk/2017/11/tour-white-lady.html

It’s just one week before Christmas, but Avery Dunham cannot change Ignus Burke’s mind. They absolutely must travel back in time and rescue the White Lady in the painting in his living room.~

In the ghostly White Lady lore I’ve read, the tales don’t usually portray her as vindictive—usually. And that’s the catch with my ghostly, magical, adventure through time. Oh yes, and there’s romance.~

Blurb from The White Lady:

Avery Dunham has always been ready to follow her friend, time-traveling wizard, Ignus Burke, on incredible adventures. This time, though, she has serious misgivings. It’s just one week before Christmas, but she cannot get him to change his mind. The usually cool and collected magic-wielding leader is wholly obsessed by the portrait of the White Lady whom he is bent on rescuing.

Almost as soon as they begin their journey, it becomes clear their mission is a trap.

Avery was right: this adventure is not going to be like any other.~

Avery had a few queries on the tip of her tongue, like, “Are you out of your freaking skull?”

If she didn’t ask, Stan probably would. They’d graduated from high school this past June and worked part-time ‘nothing’ jobs, taking a break before college while finding their way, as Avery’s mother put it. Mostly, they were drawn to Ignus like moths to a flame, especially Avery. Not that he noticed.

If only he’d look at her the way he did the white lady. More and more, the portrait seemed to dominate his thoughts. How could a petite, okay short, girl in a sparkly pink sweater and unicorn leggings compete with this tantalizing beauty?

Avery wasn’t plain, some even referred to her as cute, but exotic didn’t describe her. Quirky, sure. She wouldn’t term her brown eyes deeply affecting, and her face wouldn’t compel men through centuries to her side. The best she could do was plead with him.

No reply. He wore his stubborn look. Crossing his arms over a lean chest, he tilted his head to better view the femme fatale on the wall above them.

The tousled brown hair covering his ears and forehead needed a trim. In his red Zombie Preparedness hoodie with a white rescue logo, gray dress pants, and white high-topped sneakers, he was the quintessential nerd. Most importantly, he was a wizard and time traveler with a passion for rescuing lost souls. His fervor for this particular lady was alarming.~

The White Lady is available in eBook from all online booksellers.