I’m glad to have fellow Wild Rose Press Author Brenda Whiteside with us to share her wonderful dog memories and western romance, The Deep Well of Love and Murder (The Love and Murder Series Book 5).

Brenda: I’ve been lucky to share the life of a host of cats and dogs over my lifetime. The luckiest period of time was a ten year stretch when Rusty lived with us. He was by far the best animal friend FDW and I ever had. The day we walked into PetSmart for cat food and walked out with a rescue puppy, was a surprise and a great day. That puppy looked at me with big eyes rimmed in deep brown, and I fell in love. 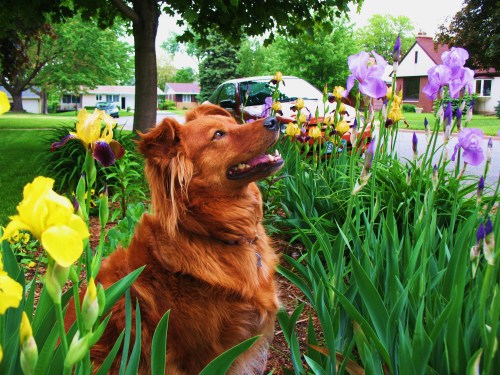 Rusty came from the Navajo Indian Reservation in Northern Arizona. His mama was a Red Heeler cattle dog and his daddy was a stranger passing through the res. Judging from Rusty’s long fur, streaks of gold, and personality traits, we’re pretty certain that stranger was a Golden Retriever.

Not only was Rusty an affectionate doggie, but he was also the “smartest dog in the world.” He helped me unload groceries from the car carrying in packages of paper goods and other sundries. Then, I would stand on a stool, and he would hand me rolls of paper towels and toilet paper to store on the shelves. When he saw me carrying dirty clothes from the hampers to the laundry room, he’d chomp some pieces and follow me. Every morning, he’d wait at the door to go out for the newspaper. He was FDW’s favorite fishing buddy. He’d jump with excitement whenever my husband had a fish on the line. But he’d also scold him when he went too long in between catches.

He’s been gone for three years and we still miss him.

Rusty has a role in my latest release, The Deep Well of Love and Murder, series book five. He was the inspiration for Perro, a Red Heeler mix and the best friend of Randy Silva. Perro was born unable to utter any sound and his hearing is limited to Randy’s high-pitched whistle, but his other senses are heightened. He warns Randy of danger more than once. I had fun including Rusty/Perro in this story.

Blurb:
After an abusive childhood and bad marriage, Laura Katz has finally found a home, stability…and possibly love. But her blissful refuge as nanny on the Meadowlark Ranch, miles from Flagstaff, shatters when her ex is released from prison, determined to reclaim her.

Randy Silva, the Argentine foreman, has plans for his own ranch, but a nasty land grab is underway. While the battle escalates, Laura steals his heart, but there are outsiders who stand in their way. He’s in a fight for his land, and the woman he wants by his side.

Stakes are high, as the attacks on Randy and his ranch draw blood. While the vengeful ex-husband stalks Laura, a mob-backed land developer teams with a desperate gambler. Randy can’t be sure where the next attack will come from—or who will be caught in the crossfire.

Excerpt:
“You let me be the judge of what messes I choose in my life.” His hands twitched at his sides, longing to hold her and stifle her anger. He narrowed his eyes and stared deeper into hers instead. “Taking care of your ex is a mess I look forward to.”
“This is my mess, not yours.” Her tone grew more combative. “I’ve handled what I’ve been dealt, and I’ll continue handling whatever gets thrown at me.”
“I don’t see it that way.” He kept his voice level, but hard edged. His own emotions, convincing her while fear of losing her, hammered his self-control. “You’re locking me out. Why? Because you think you aren’t allowed to be happy?”
Her mouth pinched in a tight line, and she glared at him. “Randy—”
“I think it’s about damned time you stopped blaming your mother, your ex, or whoever for your unhappiness.”
She whirled away, ready to flee, but he couldn’t stop now. He needed her and had to make her see how much she needed him. “Don’t be afraid of me, Laura Jane.” He shuffled a half-step closer.
“I’m not afraid.” She faced him again. “But I don’t need you to tell me how to run my life, if that’s what you think you can do.”
Perro jumped and planted his paws on Randy’s hip, panting heavily. “For Pete’s sake, Perro—”
Laura’s brow furrowed. “Do you smell that?”
“What?” As soon as he’d asked, the hot, smoky scent assaulted his senses.
Fire.

Bio:
Brenda and her husband are gypsies at heart having lived in six states and two countries. Currently, they split their time between the Lake Roosevelt basin in Central Arizona and the pines in the north. Wherever Brenda opens her laptop, she spends most of her time writing stories of discovery and love entangled with suspense.

Thanks for stopping by! Please leave Brenda a comment! 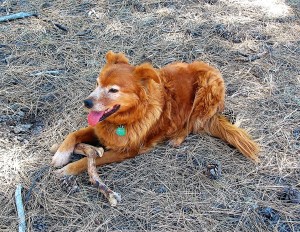 Kathryn: Some folks in our neighborhood post a sign on their door that says, “dogs welcome, people tolerated.” Although, I’m not that drastic, I do love dogs, cats, and most critters, except those with six and eight legs. I am thrilled to share my “Fur Babies” story on Beth’s blog and also to tell her readers about my latest book released from The Wild Rose Press.

We have two dogs and two grand puppies. A grand puppy of course is a dog that is one of your children’s. My youngest son’s dog, Fei, (that’s supposedly Chinese for ‘dancing air spirit’?) is one of my favorites. She is a yellow lab Greyhound mix and has quite a personality. My two fur babies are all American dogs; just like the rest of us in this country, a mixture of anything and everything.

My youngest son found our dog, Bitsy, almost 8 years ago wandering around the parking lot of a Kohl’s department store. She was half starved, dehydrated, and had every parasite known to man. We took Bitsy in a few weeks after he found her and started the long road back to health. She was only about 10 weeks old when we got her. She’s a very well behaved with lots of herding dog mix. Perhaps English Shepherd and Shetland sheepdog. She’s very protective of us and when given the opportunity, will herd the dogs that live next door. She’s had agility and herding training. Her trainer says, “she’s a character with an attitude.”

This is from a painting called, “Found”, by Walter Hunt a British painter who lived early in the 20th century. Seeing the painting for the first time was dumbfounding because I had never seen another dog, alive or in a painting, that resembled Bitsy so closely.

Our other dog is a ‘big brown American dog.’ We got him from the Neuse River Golden Retriever Rescue, and he may indeed have some Golden in him. The little girl whose family was his first foster family named him “Barley’, but since that’s something I put in my Scotch Broth, I renamed him ‘Barkley’, and then I added the ‘Sir Charles’. He is a loveable old fellow, who had a very hard life before we got him.

There’s a serial killer murdering Irish-American tourists all over Ireland. Jim O’Flannery of the Boston Globe and Megan Kennedy of the Irish Times, are teamed up to report on the killings. They want to work together, but stay clear of each other emotionally; there was A LOT of trouble with the opposite sex in the past. But, Jim’s guardian angel appears, as a leprechaun, to pester and cajole Jim into getting involved with Megan. Jim can see Seamus, Megan can’t.
Jim and Megan trail the murderer to the west coast of Ireland, piecing together his motivation and where he may strike next.

An attempt is made on their lives, and only Jim’s quick wits saves the two. Megan disappears. Has the killer kidnapped her? Can Jim, with Seamus’s help, save her from mortal danger? 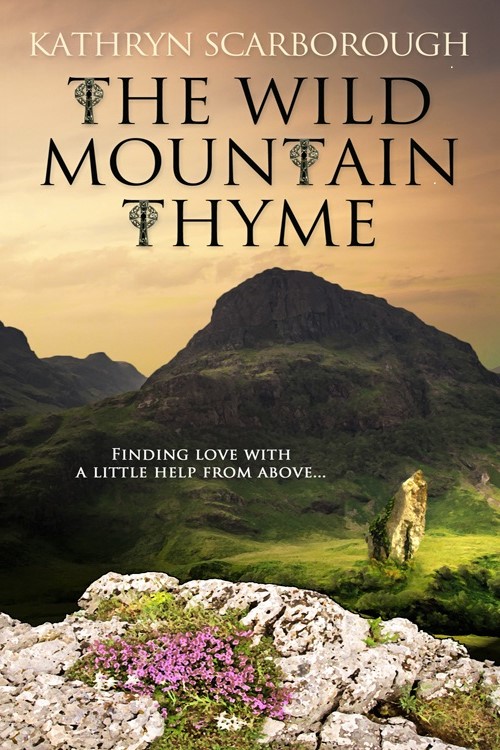 Excerpts:
The elevator started again, but jarred to a stop suddenly between floors. There was not a sound.
Jim felt as though he’d fallen into a vacuum. He stood very still and tried not to breathe. The only sound was the rapid beat of his heart.
A puff of green smoke rose from the floorboards. It wavered through the air and wrapped itself around Jim as it hovered and shimmered. Out of the swirling vapor popped a little man about three feet tall. He wore a Kelly green waistcoat, green breeches, green knee-high stockings, and green shoes with shiny silver buckles. Jim backed against the wall of the elevator as he felt the blood rush from his face and into his feet. His jaw slid south, and his heart hammered painfully
“I’m not trying to give you palpitations, boy-o, but you must listen. Aye?” said the apparition. The little man had a long, crooked nose, slightly slanted, pale blue eyes, pointy ears, and a long stemmed pipe clutched between his teeth. His bright, fiery red hair fell down around his shoulders in soft He had a beard of the same fiery red shade that curled in front of his chin, like he’d used a curling iron to force it into shape. He held his hat, an elf’s pointed cap, in front of him, as he stared intently at Jim. Jim felt the air whoosh out of him as he slid soundlessly to the floor of the elevator. And then he forgot to breathe. The little man walked up to him, nose to nose and in an undertone, he said very quietly, “Boo.”
Jim gasped.
“Grand. I had to get you breathing again.”

All Jim had to do was take one look at Megan’s stricken face to know that the guy had done plenty of damage. Richard was a type; the sort of man who was too slick for his own good. He had charm oozing from every pore. Jim hoped he could soothe Megan out of her hurt, maybe he could give her a hug and—
Those thoughts came to a screeching halt when, over Megan’s shoulder, he glimpsed Seamus scowling at him. This time the elf/angel stood, with hands on hips and his toe tapping, in front of a teeny, tiny gothic church. The leprechaun looked steamed, and for good measure shook his head. Jim raised his hand and with as unobtrusive a movement as possible, backhanded Seamus off his little tuft of magical grass, mimicking a fly-shooing movement. Jim turned his attention to Megan. She stared down at the top of the desk, idly picking up a file and then letting it drop. Finally, she sat and took a deep cleansing breath.
“He’s scum,” she hissed under her breath.

Get The Wild Mountain Thyme in Kindle:

Check out Kathy’s blogs at
https://www.scarboroughbooks.com

I’d certainly love to hear what you think of the book.
Let me know, you can reach me at:
Kathryn@www.scarboroughbooks.com

Thanks for stopping by! Please leave Kathryn a comment!