“Winter and spring overlap at the seams…” ~Terri Guillemets

Thus far winter has been mild in the Shenandoah Valley. I haven’t yet needed a heavy coat to go outdoors. A thick gardening jacket, gloves, and a scarf will do. Last week found me still planting crocus and other small bulbs, unheard of in January. But the extended forecast suggests we are in for a stretch of colder temps, though not a lengthy period. The long range forecast points to a warmer February and March while still having some chilly nights. This works for me. After a snowfall or two, I’m satisfied that winter has paid us a respectable visit and we can move on to glorious spring, my giddy season.

The number of bulbs I’ve planted this fall/winter, added to the vast host already in place, promises a stunning display of color, fragrance, and beauty. And there are forget-me-nots, iris, peonies, violas, roses…a wealth to look forward to. All seems possible and probable in January. I’m filled with gardening schemes and dreams.

While I contemplate digging up the front yard, (an annual dream) I grow lovely things in my window garden and the sunspace, and I’m starting seeds. The garden makes me happy and I feel more deeply connected to God and the dear ones who’ve gone before me who also loved the good earth. And since I’m quickly done with winter, I’ll beat the groundhog to his prediction, whatever it may be, and declare an early spring. You’re welcome.

More images from my window garden to brighten your day.

‘Science has never drummed up quite as effective a tranquilizing agent as a sunny spring day.’ ~W. Earl Hall

And now, back to your regularly scheduled program.

Glimpses of Our Late May Garden 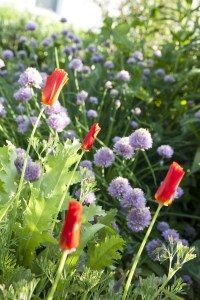 Spring 2016 in the Shenandoah Valley has been especially challenging for farmers and gardeners. Crazy warmth in March lured plants out to be zapped by inevitable frosts and May has been the coldest, wettest I can recall until these past few days. We swung from having the furnace on in this old farm-house to sweltering heat. Not easy on people or plants. Still, there is much beauty in the garden, captured by daughter Elise.

“A garden is always a series of losses set against a few triumphs, like life itself.” ~May Sarton 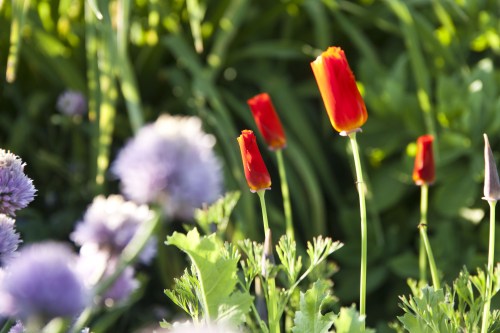 We mix herbs with flowers and vegetables. A wonderful meld. Wildflowers are also a favorite in the garden, like wild aster and Queen Anne’s Lace, plus, plus. Some were planted by birds and the wind, others from seed or stock we purchased. There are those who might refer to these as ‘weeds.’ 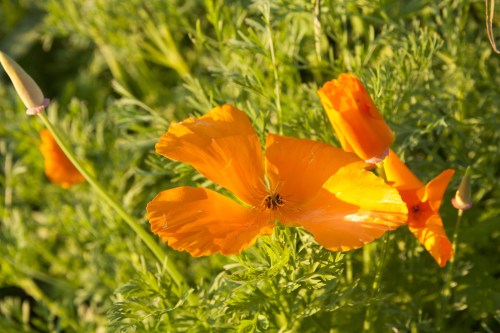 Of course, we have the garden cat, also called the Apothecary Cat or Apothecarist. I decided our garden is a physic or apothecary garden because it has many medicinal plants, which includes some of the so-called ‘weeds’, thus justifying its less than perfect state (according to suburbia, anyway, which, thank God, we don’t live in). Elise suggested kitty be called the Apothecarist (one who dispenses medicines and herbal cures). Kitty doesn’t do that, but it’s a great name. Before this, he was known as one of the triplets. 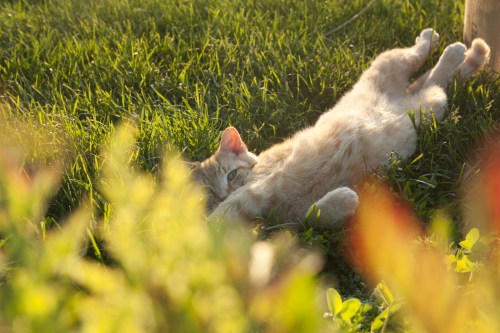 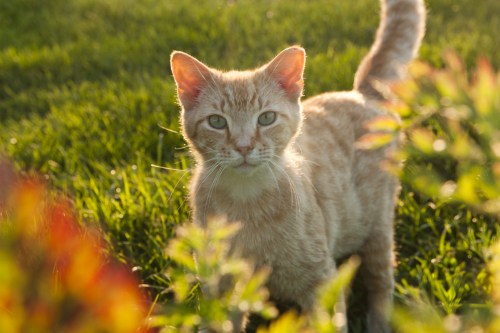 This spring we’re making pathways with cardboard boxes covered in straw, using my Amazon box collection. I save those boxes religiously. The straw we gleaned from the barn. Pathways are a work in progress. Below is a pic of me against a patch of sweet alyssum we’ve planted in drifts in many sections of the garden. It’s just beginning to bloom. We are using alyssum as a ground cover and to attract beneficial insects and honey bees. 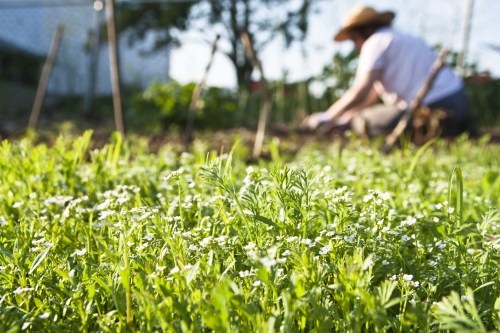 It is utterly forbidden to be half-hearted about gardening. You have got to love your garden whether you like it or not. ~W.C. Sellar & R.J. Yeatman, Garden Rubbish, 1936

My box/straw pathway, next to the potato patch. The sticks mark the many little herbs and flowers we’ve added to keep them from getting stepped on. How glorious it will be when this is all lush and blooming. I’m smashing potato bugs. 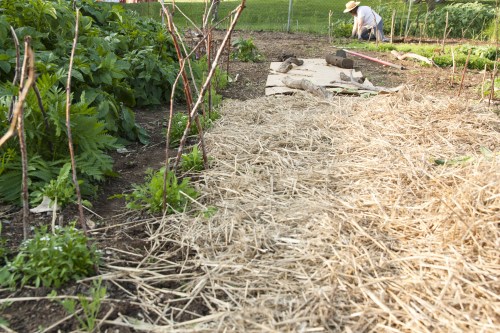 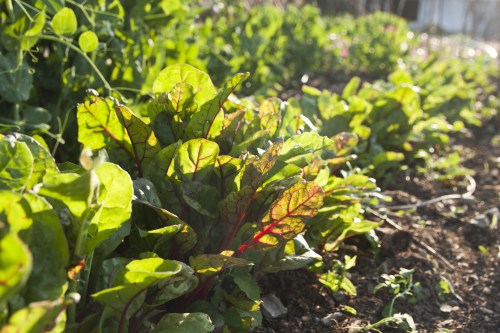 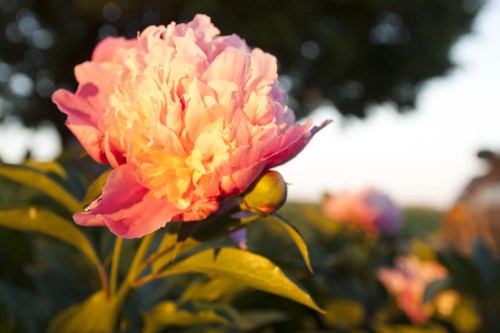 (This Peony has been here forever, since my Mother-in-law’s time and possibly farther back than that. The house was built in the 1870’s.) 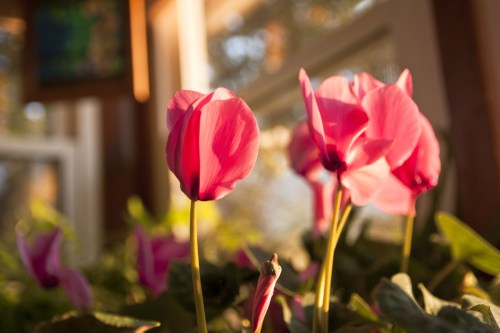 In the kitchen window, I have several pots of cyclamen. These remind me of my late sister-in-law, Catarina. A cyclamen was the last plant she ever gave me. She loved flowers. I grow cyclamens in remembrance of her, and I often think of her. I ordered this pink one last year from Jackson & Perkins to commemorate her passing. The next month, J&P sent me a second identical plant. So I have two thriving cyclamens. Thank you whoever sent this. I inquired, but no one at the company seemed to know why it came at no charge. Maybe Catarina didn’t trust me to keep the first one alive. Admittedly, the cyclamen she gave me didn’t make it, but this is the same color, and I’ve learned more about their care now.

One of life’s mysteries. The garden is full of surprises.

Some roses didn’t survive the plummeting temps this winter, but Abraham Darby did. My favorite rose. 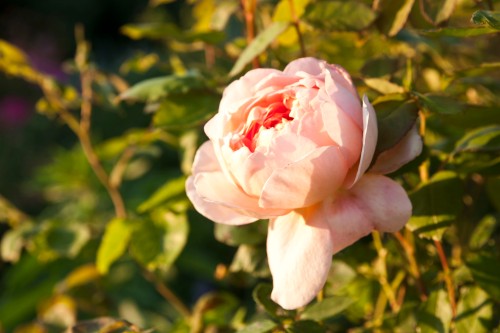 ***All images by Elise Trissel.