A warm welcome to fellow Wild Rose Press Author Barbara Bettis. Barbara is sharing her grand-furbaby and her medieval romance, For This Knight Only.

Barbara: For as long as I can remember growing up, I had furbabies. Living in the country, I had kittens and dogs. We just never NOT had a furry pet. Unfortunately, over the years, I’ve had to give them up for one reason or another. My last was a beautiful Australian shepherd who loved to ‘herd’ my husband and me on our daily walks.

These days, I have adorable furgrand-babies. The one I’d like to share with you is a mix, with the look of a miniature pinscher. Black with brown touches, he’s called Cocoa. (I had photos of him but I couldn’t get them downloaded from my phone for some reason, so I borrowed a shot from online to give you an idea of what he’s like. Just picture this sweetie with black and brown coloring.)
That’s Cocoa. Faster than a speeding bullet.

He and I had a getting-to-know-you period when he was young. He’d greet me at the front door, and it became a game (to him!) to see if he could slip past me before I could get in. I’ll long remember the first time he was successful. My grandson and granddaughter weren’t home from school yet, and there I was, all alone, searching the neighborhood for Cocoa after he darted between my legs. I was sick with apprehension that I’d lost their dearly beloved pet. It was a fun game—he’d race from one yard to another, me right behind. He’d stop and watch and as soon as I got close, he’d yip and dash off again, out of sight.

Finally, some neighbors helped corral him, and I got him back inside. I was exhausted. He was ready to play with his favorite toy, a tennis ball. In those days, he’d jump on my lap and bounce around, yipping, trying to lure me into some mischief—like giving him too many treats. (Hey, grandmas can spoil grandpets, too!)

Now he (and I) have slowed down a bit. He still greets me at the front door before I even open it, this time with his tennis ball in his mouth. He leads me up the stairs where he drops the ball and jumps up and down in welcome, then stands, watching expectantly for me to play fetch. He wears out a lot sooner, though. These days, he even climbs (no jumping now) on my lap to actually lie down and rest. I’d like to think I’ve trained him to do that. But both of us know who trained whom.

I miss having my own furbaby. Now that I’ve retired, I’ve been thinking of getting another dog (unfortunately I’m allergic to cats.) I haven’t settled on the breed yet, although I have a fondness for greyhounds. A friend has a pair of retired racing greyhounds. I asked her if they were a problem to manage. She said no. The only running they do now is racing her to the couch. I could love a dog like that 

My latest release is a medieval romance, For This Knight Only. 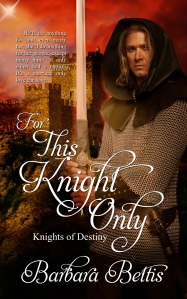 He’ll do anything for land, even marry her; she’ll do anything for her people, except marry him. If only either had a choice. It’s a marriage only love can save.
Sir Roark will do anything to gain land, even beguile an unwilling lady into marriage. He knows she’s much better off with a man to take control of her besieged castle, to say nothing of her desirable person. But it isn’t long before he discovers that, although her eyes sparkle like sunlight on sea waves, her stubbornness alone could have defeated Saladin.

Lady Alyss is determined to hold her family’s castle, protect her people, and preserve her freedom— until her brother’s dying wish binds her to a stranger. Still, she’ll allow no rugged, over-confident, appealing knight to usurp her authority, even if she must wed him. Especially since he thinks a lady’s duties begin and end with directing servants. Alyss has a few surprises for her new all-too-tempting lord.

But when a common enemy threatens everything, Roark and Alyss face a startling revelation. Without love, neither land nor freedom matters.

Check it out here
https://amzn.to/2Xlzynj

Award-winning author Barbara Bettis has always loved history and English. As a college freshman, she considered becoming an archeologist until she realized there likely would be bugs and snakes involved. And math. Through careers as a newspaper reporter and editor, then a college journalism and English professor, she’s retained her fascination with history. Give her a research book and a pot of tea, and she’s happy for hours. But what really makes her smile is working on a new story. Now retired, she lives in Missouri where she spins tales of heroines to die for—and heroes to live for.

Thanks for stopping by. Please leave Barbara a comment.