A warm welcome to CJ, who joins us to share her beloved dog and her paranormal suspense, Dream Wide Awake.

CJ: First, let me clarify. Furgy is my dog. My son, Zak, thinks she’s his, but she’s mine until the end of time. I’ve never lived without a dog for more than a few weeks. Rayberg, Lucky, Daisy, Tasha, Cody, Maggie, and Molly all hold places in my heart. Furgy owns my heart. 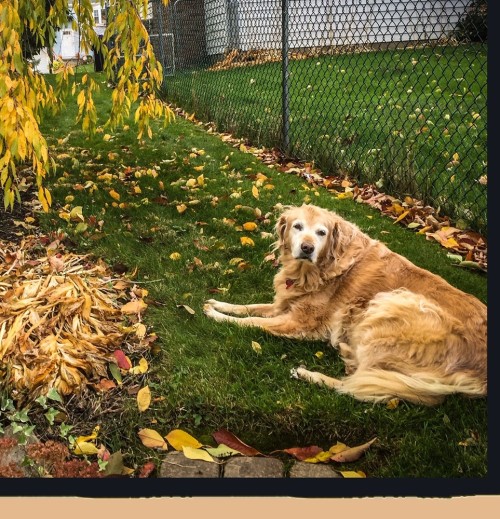 She came to us thirteen and a half years ago when my children still lived at home. Since then, she’s kept me company as I watched my son and two daughters pack their belongings and hustle off to college and then lives of their own.  I live in a small town where jobs are scarce. So, each child ventured off to chase their dreams in bigger cities—Raleigh, Philadelphia, Los Angeles—while my hubby, Furgy, and I stayed behind. Three years ago, when I retired from my full-time job to chase my own dream of novel writing, Furgy sat at my feet and encouraged me. In fact, she’s here now. Positioned two feet away, sprawled out on cool tiles, hoping for a breeze from beneath the front door.

Last month we nearly lost her, but miraculously, she rebounded. When she was sick, I told my husband he might have to bury me in the back yard beside her, because Furgy isn’t just my dog. She’s a part of me. A faithful companion who loves me unconditionally. Her entire world revolves around waiting for a pat on the head. A scratch under the chin. The toss of a potato chip. (Don’t tell Zak.)
We used to run together on dark mornings before work, but her arthritis is too bad now. When she has a good day, we venture out for a half-mile walk around the block. Sometimes her eyes twinkle and she runs a few steps, looks over her shoulder as if to say, “Remember?”

I remember.
I remember a crowded back yard, and Furgy jumping off a deck into a four-foot pool packed with kids. I remember her climbing into Zak’s or the girls’ beds with toys in her mouth to play, chasing sticks they threw into the lake on hot summer days, sneaking treats off the table at birthday parties, trudging through rocks and streams to get to swimming holes. I remember her sitting in the shade and watching soccer games and t-ball, and towing kids through snowy backyards on sleds. Catching snowballs with her teeth, playing tug of war with Zak, stealing the girls’ stuffed animals, running on the beach with relentless energy.

We’re a little slower, calmer, smarter, now. We’re definitely more patient with each other, and we sort of grew into a language of our own. I know when she sits straight up beside me, she needs a scratch on the head, and she knows when I am teary eyed that I am missing my kids and need her snuggled by my feet. And as long as I can look down and see those loyal eyes gazing up at me, all’s right in the world.

Furgy will be our last dog. We travel to see our children too much these days for another. But God in his infinite wisdom, saved the best for last.
Yep, Furgy is my dog until the end of time.

My novel, Dream Wide Awake, was inspired many years ago on a night I met fright. I was sleeping in the attic of my grandparent’s home—just like the little girl in chapter three.

Blurb:
Mikala Daly has visions.
Three boys are missing. Six-year-old Mikala Daly can see the spirit of one of those boys. She knows she can find and save the other two. Will her father let her?

One of the best detectives in town, Mikala’s father, Jack Daly, searches frantically for the abducted boys. Years before, Jack married into a family rumored to see people on the other side. Jack didn’t believe in their psychic abilities until that gift¬¬—curse—befell his daughter.

Now Mikala relays her dreams to him, and he struggles to keep her visions secret. Is he risking her life? He works to find the boys before the kidnapper locates Mikala or American government officials force her into their secret remote-viewing program—Project Dream of Area 51.

She was quiet, still, her expression soft. Lip relaxed against lip. Then her eyes opened.
“He can see me.”
At first, because of her casualness, he thought he’d surely heard her wrong. “Who can see you?”
“The bad man.”
His calmness faded to confusion. He tightened his eyebrows. Premonitions, they called these episodes. His wife experienced them, now his daughter. But they were never interactive.
“What do you mean he can see you?”
“He said my name. He has a guide.”
“A guide?”
“You know, Daddy, someone who shows him movies. He knows who I am.”
“No, Mikala, the bad man does not know who you are.”
“Yes, he does, Daddy.” For the first time, he heard panic in her voice. “That’s the reason he is at Danny’s house.”
A creak in the floor behind him grabbed his attention, and he turned his head. Lisa darted from the bedroom, ripped Mikala from his arms, and handed him something in her place.
“I told you not to allow this. I said you were playing with fire.”
“Lisa, she’s wrong. He can’t see her.”
“Yes, he can, Daddy.”
“No, he can’t, Mikala.” He lowered his voice to sound stern.
“Yes—yes he can. He’s with Danny right now. Run Daddy. Get Danny!”
“Go.” Lisa screamed so loud one of the boys in the next room woke crying.

Jack looked down at his lap—at the ratty sneakers Lisa had placed there. For the moment it took him to put them on, he wondered if he should run or drive the block and a half to his sister’s house. He decided, descended the stairs, and bounded out the front door bare-chested, leaving Lisa behind switching on lights and talking into the scanner. She would call for a cruiser to go to Janice’s house, to her own house. But Mikala was wrong about Danny. She had to be. He was going to be in a heap of trouble with the chief later.

He ran down the driveway and disappeared into the black night within seconds. His legs turned over like an Olympic sprinter’s, his breath labored, and sweat beaded on his upper lip. He rounded Third Street and nearly slipped in the wet grass on Nevada Drive but caught himself. He saw her house in the distance. Janice, four months separated from her husband, was alone there with her son. Alone like the others. Three single mothers of three abducted little boys.
His mind raced. The police would be at his house in two minutes. At Janice’s in three. They protected each other’s families.

When he was four houses away, he began screaming his sister’s name. Trying to scare anyone off. Make the bad man drop the child? Leave without the child? He didn’t know why he screamed. By the time his feet hit her driveway her light had turned on. The front bedroom window opened.

“Jack?” Janice’s voice slithered through the screen.
He passed her window and ran toward the back of the house, toward Danny’s room. He could see broken glass on the ground shimmering with the reflection of a street light. Dear God, no, he thought. It couldn’t be. These abductions could not have hit his family.
“Danny,” he yelled.
When he reached his nephew’s window, the whites of Danny’s two little eyes glowed in the dark room. He was there. Standing. Looking out the bare, open window back at him. Waiting.
“Hi, Uncle Jack,” Danny said, his little face peeking over the window ledge, his stuffed bear, Tony, nudged under his chin.
Jack leaned hands on house and huffed, trying to catch his breath. Trying to decipher Danny was okay. Alive. Mikala was wrong.
“Thank God, thank God,” he uttered out loud. When he caught his breath, he gazed up at his nephew.
That’s when horror seized him. Above Danny’s little face, secured on the broken glass, a scribbling on Christian stationary paralyzed him. It was the abductor’s fourth message, but the first to make Jack’s blood circulate like an electrical current. The words he read flowed over his lips in a whisper, expelled with terrifying breath.
“One mulligan for Mikala.”

CJ Zahner is a digital-book hoarder, lover of can’t-put-down books, and the author of Dream Wide Awake and The Suicide Gene. She has three more novels pending, Project Dream, Within the Setting Sun, and The Dream Snatchers. Writing novels since 2015, that year her only sibling was diagnosed with early-onset dementia, and Zahner walked away from her full-time grant writing and part-time freelance writing job to follow her dream of becoming a novelist. She hopes to read, write, and run happily ever after…

Thanks for stopping by. Please leave CJ a comment.