Welcome JM Stewart ! I’m very glad to have you here to share your furbaby and contemporary romance, Luc.

JM: Hey everybody! So glad to be here with you all. Thanks to Beth for having me. I currently have two dogs, Misty and Tiger. We adopted both from shelters when they were puppies when we were living in Seattle. Have had them for seven years now, and they’re spoiled rotten. Thought I’d share how we ended up with Misty.

After our German Shepherd, Ruby, died, we weren’t sure we wanted another dog. We’d had her for ten years, so her death left a big hole in our hearts. Six months later, though, hubs and I got the yearning to fill that space again, so I started looking on Petfinder.com. One particular pup grabbed me. A local shelter had a litter of nine puppies, Lab and Shepherd mix. The pup they chose for the pic ended up being Misty. I fell in love with her little face. She had a lot of German Shepherd in her; a black muzzle and ears, and big stripe down her back.

Fast forward a couple of weeks, we finally got the call the pups had reached ten weeks and were ready to be picked up. They sponsored them at the local Petsmart that weekend, so the youngest and I went down. The woman who ran the shelter had a first come, first serve rule. Meaning, applicants who applied first got first choice. So by the time our turn came, four were left, two girls and two boys.

Misty was in a cage with her sister, sleeping. There was chaos all around. Hopeful parents waiting with their kids to pick up their pups. People coming into the store who stopped to peek at the puppies. Misty had no interest in any of it. She just wanted to sleep (a trait she’s never grown out of; she doesn’t want to be bothered when she’s sleeping). lol But when I held her, she curled up in my lap, a little confused at the fuss going on around her but just happy to have a lap. The woman who’d been fostering the pups told me she was content to simply sit beside you on the couch (another trait she’s never grown out of). I fell in love. 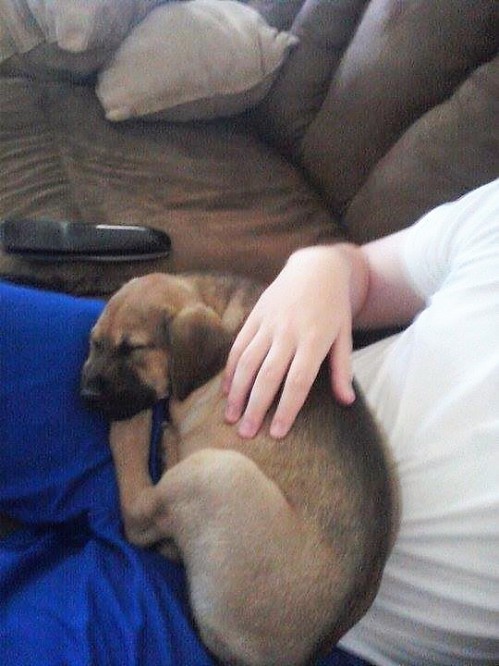 Labs have a lot of energy, did you know that? I do now. lol Boy howdy was she a handful. Big chewer and more energy than any of us knew what to do with. You could walk her an hour twice a day, and she’d still be raring to go. Just a bundle of energy.
She’s so smart, though. Easily trainable and highly motivated by praise. Got the gist of potty training in a week, learned to sit in one day. If you’re a stranger coming up to my house, she has a deep, scary bark. Good for scaring away unwanted solicitors. 😉 But she wouldn’t hurt a fly. The biggest love bug you’ve ever seen. Once she knows you, she’ll be your friend for life.

She had surgery on her knee about six months ago. She gets the “zoomies” and unfortunately tore one of the ligaments in her left knee. So she’s slowed down a bit, but still happiest when surrounded by her family.

And, to keep with Beth’s furbaby theme, I’m sharing an excerpt from my contemporary romance, Luc. The heroine, Liz, has a golden retriever she rescued from a shelter. 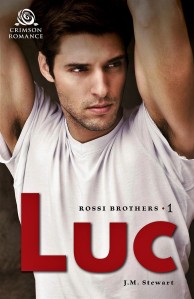 Instead of stepping back and inviting her inside, Sam drew her bottom lip into her mouth and gnashed it between her teeth. Suspicion skittered up Liz’s spine. She knew that look. Knew it well. Combined with her overenthusiastic greeting, that look suggested Sam had something up her sleeve.

She pinned Sam with a narrow-eyed stare. “There’s something you aren’t telling me, isn’t there?”

“No! I’m just so glad you came. You shouldn’t be alone today.” Sam straightened her shoulders, her expression suddenly bright and jovial. She waved a hand at Liz. When Bruce whined again, Sam looked down at him and nodded in the direction of the hallway behind her. “Well, go on. Go get him. He’s in the kitchen.”

Bruce leapt into the house, tail wagging. His nails clipped the hardwood floors as he trotted down the long hallway left of the living room.

Sam stepped aside, pulled the door open wider, and ushered Liz in with a wave of her hand. As Liz crossed the threshold, masculine laughter drifted down the hallway, halting her on the welcome mat. Joe’s hearty belly laugh she recognized, but along with it came a second, unfamiliar voice. A low, masculine rumble kind of laugh. The quiet hush of conversation followed. That second voice meant Sam had company.

It was only supposed to be the four of them. Her, Sam, Joe, and Bruce. Like always.

“I have a surprise for you.” Sam let out that nervous laugh again as she closed the door and stopped beside Liz on the welcome mat.

Liz jerked her gaze to her best friend. “What did you do?”

Sam clasped her hands together and flashed a thousand-watt smile. “Do you remember that barbeque Mom and Dad threw right before Danny left for his last tour? He pulled me aside while you helped Mom clean the kitchen. He told me, ‘If I die out there, don’t let her grieve forever. Make her get up, Sammy.’ Every time he left for a tour, he made me promise the same thing.”

Daniel was Sam’s older brother. If anybody knew what today meant, it was her. Of all days for Sam to bring this up.

“I remember. He always made me promise him something similar.” Liz gave a bare nod as grief kicked her hard in the chest. She’d known the risks, what being an Air Force wife to an active duty airman meant. She’d known every time he left for deployment he might not come back. Yet somehow, she’d never expected the worst to actually happen to her. It always happened to someone else.

She’d spent the last two years trying to pick up the pieces, to somehow learn to live without him. She hadn’t gotten far. Oh, she’d left the base in California to return home to Angel Bay, but she flat out didn’t know how to move on with her life. The need was there. To get out from beneath the grief. To feel the sun again. Joy. It was the “leaving Daniel behind” part she was having trouble with.

“So, I’m making you get up.” Sam gave a firm nod, mouth pursed in stubborn determination, and grabbed Liz’s hand, tugging her up the hallway.

With a three-year-old daughter to raise and a restaurant to run, the last thing Luc Rossi’s life has room for is love. After his fiancée’s betrayal, he isn’t sure he believes in it anyway. His colleague’s matchmaking attempt is awkward at best, but what can he do except play the gentleman? Liz ends up being smart, charming, and sexy, and he can’t resist her.

An offer to teach her to cook leads to a steamy fling, but this gorgeous older woman makes Luc wonder if it’s time to open his heart again. Can he convince Liz that giving their relationship a chance beyond the bedroom wouldn’t be a betrayal of the past she holds dear?

J.M. Stewart is a coffee and chocolate addict who, along with her husband, two sons and two very spoiled dogs, has been recently transplanted to Texas. She’s a hopeless romantic who believes everybody should have their happily ever after and has been devouring romance novels for as long as she can remember. Writing them has become her obsession.
For more about JM or her books visit: Website | Facebook

Thanks for stopping by! Please leave JM a comment.