I Never By Karen Docter

You know that word you should never say…never?
I said I’d never give in to another dog in the house. Two is enough…right? I believe I even said, at one point, that one dog is enough. That memory is a bit vague. After all, we tend to like big dogs and there’s just so much tripping over the Great Pyrenees or the Labrador or the American Boxer you can do without losing your mind and balance. The word move is not generally in their vocabulary. I think, in dog, it translates to walk between my legs. I’m too short for their translation.

When we lost our Great Pyrenees, our lab went into a decline. Piper seriously grieved over the loss of her best friend and we were worried about her health, so we decided she needed a new playmate. We adopted my daughter’s 2-year-old boxer, Mikka. They were already playdate friends. Our pet lives were full again. We’ve never (there’s that word again) had more than two dogs at one time so I figured we were safe from temptation for the foreseeable future. We’d never add another dog to the mix.

I’m usually the soft touch. My husband can say no fairly easily, but I’m blaming him for the third dog to enter the house. Okay, I’m the one who carried Tucker through the door. Still. Husband’s fault!
I was minding my own business, happily working on my latest book. My husband had gone across the street to visit with our neighbor and his guests from Oklahoma. (We knew them, had even gone on vacation with them for the last neighborhood ride. We all have motorcycles. Ours is bright yellow and called Bumblebee, a whole ‘nother story!) He’s gone five minutes, I swear, and comes rushing in the front door and tells me I have to come see this puppy they brought with them from Oklahoma.

Following, with him talking a mile a minute about how cute he is, yada-yada, I was halfway across the street when it hit me, “We’re getting a new puppy!” So, when I met little Tucker I was still trying to wrap my head around where my husband was leading me. My resistance was down. It’s the only explanation. The next thing I know, our friend thrust this week old, maybe 10-day old (I can’t remember, it’s all a blur) bundle of fluff and cuteness, his eyes barely opened, into my hands.

I was done. I was in love. I didn’t put him down again even after I carried him through our front door. “Never” became a leaf on the wind the moment I heard his story.

Tucker’s mom, a border collie, was run over when the litter was barely a day old. Her owners didn’t even realize she’d delivered her puppies until they heard them crying later that night. My friends took one of the pups to foster him. I didn’t know at the time they brought Tucker to Colorado with us in mind as his new parents. We’ve since forgiven them.

He was still being bottle fed and they offered to take him back to Oklahoma with them until he was weaned but I couldn’t let him out of my sight. I have to say, despite the fact I said I knew what I was getting myself into, I wasn’t quite ready for the reality of bottle feeding a puppy every two hours or bathing him as often as his mother would have or weaning him or….well, you get the picture.

I don’t think I’ll ever (variation of never that might come back and bite me in the fanny someday) take another puppy that young again, but I wouldn’t have missed Tucker for the world. We have a special relationship with him that we didn’t have with any of the others who were weaned first. My husband and I, and the two older dogs, are his littermates.

He’s over two years old now and really attached to all of us, including my new daughter-in-law who moved in downstairs. I think he’s in love with her, to be truthful. He runs downstairs to be with her whenever she’s home and has even been known to push his way between her and my son. We may lose Tucker when they move out because I’m not sure he won’t whine for his new girlfriend—he whines incessantly when he knows she’s home but he can’t get to her—but we’ll cross that bridge when we get to it.

Until then, I can honestly say that we’ll never add another dog to the household. It’s against the law in our town to have more than three dogs. Now, I just need to keep my husband from visiting the neighbors without me. ~

Beth: Karen, I love Tucker’s story! I have two cats who were abandoned as kittens that I raised from infancy and am also especially close to.

Some secrets are better left dead.

Rachel James’ ex-husband is released from prison determined to reclaim her and her little girl — the child is his key to controlling the James fortune. Frightened, Rachel flees to Denver with the child who hasn’t uttered a word since her daddy went to prison.

Contractor Patrick Thorne wants nothing to do with another of his parents’ charity cases. He failed his own wife so abysmally she took her own life as well as his unborn son’s. After two years, it’s time to concentrate on the bid he’s won and the saboteur trying to destroy his construction firm.

There is no room for trust in either of their hearts. But trust is all that will untangle the secrets that dominate their lives, free a little girl of her silent prison, and save them all from a serial killer who stands too close.~

At the first crack of gunfire, Rachel dove headfirst into the garden she was weeding. Listening for the second report she expected to follow, she prayed Amanda stayed at Patrick Thorne’s house where she’d gone an hour ago to play with her new friend, Suze.
Gasping for air, she inhaled the rich, spicy scent of freshly turned soil and crushed nasturtiums instead. Dirt and grit bit into her cheek and the bare flesh exposed by her cutoffs and T-shirt. The mid-afternoon sun beat hot against her shoulders and legs, and all she could do was lie there and watch a fat bumblebee dip into a russet blossom three inches from her nose.
Had she run almost nine hundred miles only to die like this, grubbing alone in the dirt like a spineless worm?
A surge of anger gave her impetus to lift her head. She peeked over the flimsy wall of twelve-inch annuals between her and the street. A second gunshot rang out, belched in a cloud of black smoke from an ancient Volkswagen bus that disappeared around the corner.
Backfire?
She groaned, more relieved than embarrassed by her overreaction. Her chin dropped. Taking several deep draughts of the thin Colorado air, she worked to calm the pound of her heart against her ribcage. Her efforts made her head swim. A minute later she was able to push herself out of the three-foot section of garden she’d mown down.
Her nerves had been on edge since she fled Dallas on Friday, five days ago. If she weren’t so overwrought it would have occurred to her Greg would never stand at a distance and take potshots at her. No. Greg liked to look into her eyes when he meted out his punishments.
An icy shiver skimmed her skin. Each day that passed without his appearance should have reassured her she’d made the right decision to accept Katy’s arrangements with the Thornes. As long as Greg didn’t track her and Amanda to Denver, they were safe.
Problem is she hadn’t felt safe since Amanda was born and she discovered what kind of man she’d married. Now she couldn’t pluck enough weeds from Evelyn Thorne’s gardens by day to tear the anxiety from her heart at night. Her growing sense of trepidation kept her awake long after the morning stars dimmed above the mile-high city’s cloudless skies.
How could the justice system simply hand Greg a “get out of jail free” card? She’d always known the man had connections in high places, but how had he arranged for the evidence in his case—evidence she’d risked everything to provide—to disappear before he even went to trial? If he’d accomplished that feat while behind bars, how in the world was she and Amanda going to stay out of his clutches?
She felt like there were giant bull’s-eyes painted on their backs, that it was only a matter of time before Greg tracked them down. During their marriage the man would spend weeks, even months, laying meticulous groundwork for one of his cons. He’d had six months to plan dozens of new punishments for his betrayer.
“‘Til death us do part, darlin’.”
His words echoed over the expanse of time and distance, ringing a fresh peal of dread in Rachel’s breast. With one hand, she brushed clumps of soil off her tangerine T-shirt and whispered a small prayer. Please don’t let him find us! 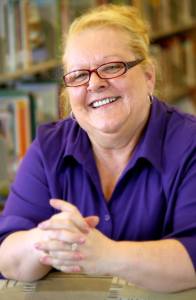 Thanks for stopping by! Please leave Karen a comment!