‘A change was coming as surely as the shifting seasons. Karin McNeal heard the urgent whispers in the wind.’ 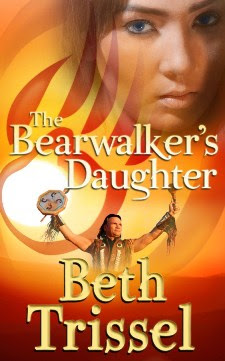 Historical romance novel, The Bearwalker’s Daughter, is a blend of carefully researched historical fiction interwoven with an intriguing paranormal thread and set among the clannish Scots in the mist-shrouded Alleghenies. The story is similar to others of mine with a western colonial frontier, Native American theme, and features a powerful warrior or two. My passion for the past and some of the accounts I uncovered while exploring my early American Scots-Irish ancestors and the Shawnee Indians is at the heart of my inspiration.

A particularly tragic account is the driving force behind the story, the ill-fated romance of  a young captive woman who fell in love with the son of a chief. As the result of a treaty, she was taken from her warrior husband and forced back to her white family where she gave birth to a girl. Then the young woman’s husband did the unthinkable and left the tribe to go live among the whites, but such was their hatred of Indians that before he reached his beloved her brothers killed him. Inconsolable and weak from the birth, she grieved herself to death.

Heart-wrenching, that tale haunts me to this day. And I wondered, was there some way those young lovers could have been spared such anguish, and what happened to their infant daughter when she grew up? I know she was raised by her white family–not what they told her about her mother and warrior father.

Not only did The Bearwalker’s Daughter spring from that sad account, but it also had a profound influence on my historical romance novel Red Bird’s Song. Now that I’ve threaded it through two novels, perhaps I can let go…perhaps….

The history my novels draw from is raw and real, a passionate era where only the strong survive. Superstition ran high among both the Scots and Native Americans, and far more, a vision that transcends what is, to reach what can be. We think we’ve gained much in our modern era, and so we have.  But we’ve also lost. In my writing, I try to recapture what should not be forgotten.  Read and judge for yourself. And hearken back.  Remember those who’ve gone before you.

As to bearwalking, this belief/practice predates modern Native Americans to the more ancient people. In essence,  a warrior transforms himself into a bear and goes where he wills in that form, a kind of shapeshifting.

Karin McNeal hasn’t grasped who she really is or her fierce birthright. A tragic secret from the past haunts the young Scots-Irish woman who longs to learn more of her mother’s death and the mysterious father no one will name. The elusive voices she hears in the wind hint at the dramatic changes soon to unfold in the mist-shrouded Alleghenies in Autumn, 1784.

Jack McCray, the wounded stranger who staggers through the door on the eve of her twentieth birthday and anniversary of her mother’s death, holds the key to unlock the past. Will Karin let this handsome frontiersman lead her to the truth and into his arms, or seek the shelter of her fiercely possessive kinsmen? Is it only her imagination or does someone, or something, wait beyond the brooding ridges–for her?~

The Bearwalker’s Daughter is at Amazon in kindle and print at the link below:

*Cover by my daughter Elise Trissel. She also formatted the novel for print.

“Ms. Trissel’s alluring style of writing invites the reader into a world of fantasy and makes it so believable it is spellbinding.” –Long and Short Reviews

For more of my work, visit my Amazon Author Page: https://www.amazon.com/Beth-Trissel/e/B002BLLAJ6/

Or just do a find on my name. I am the only Author Beth Trissel in the world.

Marketing With A Story

Sowing the seeds of today's dreams, so tomorrow they are harvested as realities