Some of poke’s many names are: Red Ink Plant, Virginia Poke, and Ink Berry. The ripe, deeply purple to reddish-purple berries are among the very first natural inks of the new world. So enduring is ink made from pokeroot berries that it is still to be seen in museums. The berries also produce multitudes of black seeds which the birds love and are said to become intoxicated from eating. I haven’t really noticed any birds on a ‘pokeberry high,’ odd considering the vigorous stands of poke growing here and there. Maybe I’m not paying proper attention, or just think that’s how birds are. Come to think of it, we do have extremely euphoric birds in late summer. 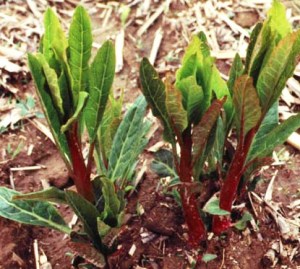 As to the edible shoots, these fat young sprouts grow beside the withered remains of the former season’s plants, the only part that’s not potentially poisonous. Tender shoots gathered in the spring were so popular that they were carried back to Europe by early explorers and proclaimed delicious. The mature and then poisonous stalks take on a purplish hue in place of the appealing green of the younger plants. *Warning, when poke shoots change from green to that deeper reddish-purple color, they’re no longer edible.

Medicinal uses: The large poisonous roots were collected and dried in the fall. Indians and colonists cut the dried root into pieces and steeped a level tablespoonful of the root in two cups of boiling water, then drained the liquid and dosed themselves sparingly by the spoonful. In small doses, it stimulates the glandular network by acting similarly to cortisone. Poke was believed to be the most effective drug that could favorably alter the course of an ailment, having the power to stimulate the body to heal, assuming the patient wasn’t overdosed.  It can also make you quite sick and even prove fatal. One of those ‘Oops, guess that was too much,’ treatments. Tea was also brewed from the ripe berries, and used sparingly. Poultices and salves made from the roots and berries were more safely applied than imbibing the tea. Good old pokeroot salve.

***Pokeroot is also known as the cancer root and has some amazing possibilities in treating various cancers. For more visit this fascinating link: http://www.quantumagriculture.com/node/203

11 responses to “Pokeroot (The Cancer Root)”