The Age-Old Uses of Chokecherry 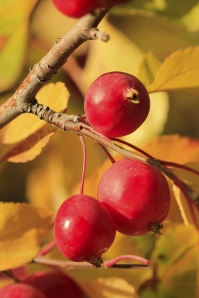 The fruit of the chokecherry is edible raw or cooked, but is harsh tasting, so generally used in jellies and pies. The seeds contain cyanide, readily detected by its bitter taste, so care should be taken not to ingest many seeds. But the uses for this plant are astounding.

“Chokecherry bark is classified by many Indians as one of their most valued herbs. The bark is listed as bitter, astringent, narcotic, stimulant, mild tonic, sedative and pectoral. Both hot and cold water are used as solvents. All the bark is useful, but the inner bark of the roots is reported to be the best. The bark was used to relieve headache and for “heart trouble” by the Bella Coola people. Herbalists have used it for intermittent fever, worms, dyspepsia, consumption, hectic fever, the congestion of phlegm and bronchitis.”

From Prunus Virginiana L: Medicinal Uses: The inner bark, although the root is always better. “Wild cherry is an herb that has been used for a very long time in herbalism and is mostly noted for its use in respiratory problems. It has a soothing and sedative effect on the respiratory system. Wild cherry soothes the cough. In digestive disorders, it is very noticeable and helps the flow of gastric juices. This is helpful in conditions of dyspepsia.”

From Bear Medicine Herbals: “Wild cherry is an excellent sedative and tonic, quieting irritation of the mucosa, terminal nerves, and lessening violent cardiac action dependent upon weakness. When a tonic and sedative is desired that will not unduly excite the circulation, wild cherry is a most useful drug. As such it may be used in atonic dyspepsia, and in convalescence from fevers and inflammations, especially after pleurisy, pneumonia, and la grippe.” ~Felter

From Field Guide to Medicinal Wild Plants by Bradford Angier:

“The youngster loved chokecherry grows as both a bushy shrub and as a tree seldom higher than 22 feet, its branches bending with clusters of darkening red or blackish purple berrylike drupes which pucker the mouth but are nevertheless prized by many people, especially children.”

Uses: “It should be noted that the pleasant, bitter, almondlike aroma of these medicinals is due to the presence of small amounts of hydrocyanic acid which, although highly volatile, can be highly poisonous and even fatal. This acid is particularly strong in the inner bark, seeds, and leaves. Despite this, the Indians and therefore the settlers often used some of these in their palliatives and their foods, and the huge amount of fruit devoured never seemed to hurt any of us youngsters.”

“In Appalachia today in some remote localities the inner bark or cambium is still used as a flavoring agent in cooking, and a tea made from it is utilized for coughs, cold symptoms, as an expectorant, and for cholera.” (Bear in mind this book was published in the late 1970’s.)

The dried and pulverized bark was scattered over open sores. It was smoked for headache and was another of the innumerable cold remedies. The bark was steeped to treat anything from measles to stomach trouble, and it was given to women in labor in an effort to relieve their pain. The infusion was also taken for worms, for tuberculosis, as a sedative, and for some fevers. Indians boiled the inner bark and gave an enema with it for hemorrhoids. As has been indicated, a tea brewed from the inner bark seemed to help control nervousness and to allay spasms of the digestive tract.” (Chokecherry was much used by Native Americans)

“The chokecherry was introduced to Europe in the mid-eighteenth Century and was first cultivated in 1724. Its occurrence in North America may have become more widespread as a consequence of deforestation by European settlers.”

***I noted an incorrect reference of the use of chokecherry bark on the mini series World Without End, based on the novel by Ken Follet They didn’t have chokecherries in England in 1327. I also thought the heroine, supposedly a skilled herbalist, should have realized her parents were both poisoned. Other than that, I enjoyed the series for the most part. 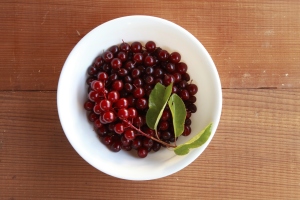 Back to the article: “The fruit were dried and ground, stones and all, for use in soups, stews and pemmican. In the interior of B.C., dried chokecherries were often eaten with salmon or salmon eggs.

The bark was boiled along with other ingredients to produce a remedy for diarrhoea. A strong, black, astringent tea was made from boiled twigs and used to relieve fevers. Dried roots were chewed and placed on wounds to stop bleeding. Teas were made from the bark or roots and used to treat coughing, malaria, stomachaches, tuberculosis and intestinal worms. Such teas were also used as sedatives and appetite stimulants. The fruit were used to treat canker sores, ulcers and abscesses.

***Quite a multiuse herb, assuming it doesn’t poison you.

14 responses to “The Age-Old Uses of Chokecherry”