“Rowan trees and red thread put witches to their speed.”

The Rowan Tree has a wealth of ancient lore and many associations with magic and witches. The tree is thought to lend protection against evil and bad spells. It’s old Celtic name, ‘fid na ndruad,’ means wizard tree. But it has many names. Ask an old Celt which they favor.

Rowan, known as the Mountain Ash in America, and Dogberry Tree in parts of Canada, is a familiar sight in the mountains surrounding the Shenandoah Valley. My mom planted one in her yard, just up the road from us, and it’s doing well (last time I checked). My dear grandmother who lived to be 99 and a half, and really knew her trees and wildflowers, was very fond of the beautiful mountain ash. Grandma would point it out to me in the Alleghenies when she lived in Blue Field, West VA. It’s gorgeous in autumn when covered with bright red berries, and particularly attractive to birds.

(Rowan Tree at Black Mount in the Scottish Highlands)

Red, the color of the berries, was thought to be the strongest color in battling the dark forces. In Ireland, rowan trees were planted near houses to protect them from the spirits of the dead; in Wales they favored graveyards for their tree plantings. In Scotland, the Rowan Tree is among the most sacred and cutting one down, or using any portion of the tree for any purpose other than spiritually approved rituals was taboo. The wood was seen as the most protective part and fashioned into sticks to stir milk to keep it from curdling, pocket charms (or amulets) to ward off rheumatism and bad mojo, and made into divining rods (for finding precious metals). Because the tree is associated with Saint Bridhig, the Celtic patroness of the arts, healing, smithing, spinning and weaving, spindles and spinning wheels were made of rowan in Scotland and Ireland. 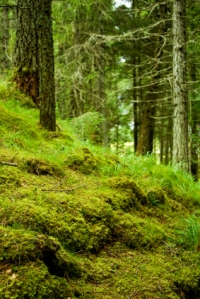 Walking sticks made of rowan were thought to lend protection to the traveler on their journey, and from evil spirits. Rowan trees planted near stone circles in Scotland were thought to be favored by fairies who held their celebrations within the protective tree enclosed circle. Fairies are extremely cautious. But the fae can also get up to mischief, so the rowan would protect you from that as well. One of those multi-use herbs/trees. (Image of old Scottish forest)

Rowan twigs were placed above doorways and barns to protect the inhabitants from evil and misfortune. These twigs might be formed into a cross and tied with a red thread while chanting, “Rowan trees and red thread put witches to their speed.”

To the 17th Century Scots, however, practicing folk medicine was associated with witchcraft, which could include carrying a Rowan charm, a twig tied with a red thread for protection. I don’t know if this (or some equally petty reason) is why my Scot’s ancestor, John Mack’s, parents were executed for witchcraft, but he left Inverness and settled in New England. There, he married Sarah Bagley, whose brother, Orlando Bagley, arrested his neighbor Susannah Martin for being a witch. Poor Susannah was later hung during the infamous Salem witch trials. So there was no getting away from the witch frenzy for John Mack. For more on my family’s involvement in the witch trials check out my post at: https://bethtrissel.wordpress.com/2012/05/03/my-ancestor-orlando-bagley-and-the-salem-witch-trials/

In the witches’ favor, it’s interesting to note that the rowan is also called the witch tree because they used it to increase their powers and spells and for fashioning magic wands, so there appears to be some disagreement here. Did it speed witches on their way, or empower them? *These conflicting beliefs are often the way in herbal lore. 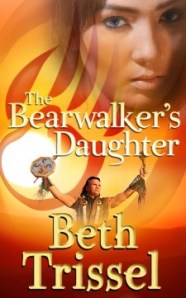 The tree was also sacred to the Druids (of course) who believed in its protective powers and burnt it on funeral pyres, also in rites of divination and purification. The tree was associated with both death and rebirth. Because Rowan was thought to bring the gift of inspiration, ancient Bards called it the ‘tree of bards.’ I suppose all writers should have rowan. I used Rowan (among other herbs) in NA/Scot’s historical romance novel, The Bearwalker’s Daughter. The elderly Scot’s-Irish woman, Neeley, uses it to protect the home.

Rowan is one of the nine sacred woods burnt in the Druids’ Beltaine fire. And, the tree is associated with dragons who apparently once guarded sacred rowan. Not sure if dragons are still on the job, or have slacked off. Come to think of it, I haven’t seen any dragons in ages. let me know if you have.

I should add that where it wasn’t deemed wrong to use the timber, the strong wood has also traditionally been used for the handles of tools, cart wheels, and planks or beams. 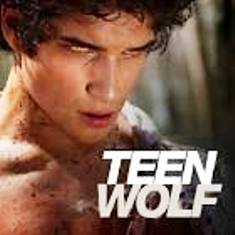 Wood from the ash tree, in the form of ash outlining a building or circle, is showing up in a lot of paranormal TV shows with American settings, like Teen Wolf, and The Secret Circle, used to ward off evil, so even if some of these characters are the nicest werewolves or witches you could ever want to meet, they cannot cross a barrier of ash.

For more on Rowan Lore, this is an interesting site: http://www.druidry.org/library/trees/tree-lore-rowan

8 responses to ““Rowan trees and red thread put witches to their speed.””