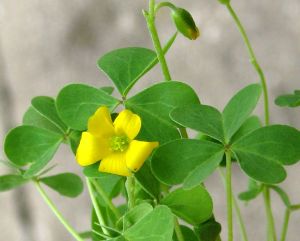 The famous shamrock belongs to the broader Oxalis and Woodsorrel family. Many are valuable ornamentals  and others can become weeds, such as the little yellow flowered variety, ‘sweet and sours’ as we call it, taking over my gardens. However, sweet and sours is also edible. As a child, I sat on the bank of my beloved creek beneath a canopy of willows and nibbled on the tangy leaves, still do sometimes. Probably should eat more of it, as the plant is rampant. I also picked bouquets of wild sweet peas and naturalized daffodils along that creek and in the patch of meadow above it. Since then, I’ve come to realize that what I was eating is an American variety of woodsorrel, Oxalis stricta, also called sourgrass, pickle plant, and yellow wood sorrel.

From the Royal Horticultural Society: All oxalis have three-part, clover-like leaves. Oxalis corniculata has a creeping habit and small yellow flowers followed by upright seed capsules. A purple-leaved colour variant is quite common. O. debilis has deep pink flowers from July to September. O. latifolia also has a deep pink flower, borne May to September 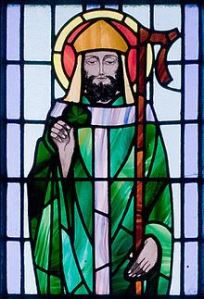 From Fine Gardening: “According to legend, the shamrock was a sacred plant to the Druids of Ireland because its leaves formed a triad, and three was a mystical number in the Celtic religion, as in many others. St. Patrick used the shamrock in the 5th century to illustrate the doctrine of the Holy Trinity as he introduced Christianity to Ireland. The shamrock became symbolic in other ways as time went on. In the 19th century it became a symbol of rebellion, and anyone wearing it risked death by hanging. It was this period that spawned the phrase “the wearin’ o’ the green”.

Today, the shamrock is the most recognized symbol of the Irish, especially on St. Patrick’s Day, when all over the world, everyone is Irish for a day! The original Irish shamrock (traditionally spelled seamróg, which means “summer plant”) is said by many authorities to be none other than white clover (Trifolium repens), a common lawn weed originally native to Ireland…Occasionally, a fourth leaflet will appear, making a “four-leaf clover,” said to bring good luck to the person who discovers it.”  ***For more on the Shamrock and other fascinating plants, check out this excellent site in the above link.

Parts Used: Leaves and herb. The Sour Docks or Sorrels, cultivated for pot-herbs, Rumex acetosa (Common Sorrel) and R. scutatus (French Sorrel), as well as the smaller R. acetosella (Sheep’s Sorrel) and Oxyria reniformis (Mountain Sorrel), owe the grateful acidity of their herbage to the presence of a special salt, binoxalate of potash, which is also present in Rhubarb. This, however, is absent in the common Docks. We find it to a marked degree in the WOOD SORREL (Oxalis acetosella), which indeed receives its name on this account, and not for any similarity in the structure of the plant, which is in no way related to the Sorrels and Docks.

Description: It is a little plant of a far more delicate, even dainty character, growing abundantly in woods and shady places. From its slender, irregular creeping rootstock covered with red scales, it sends up thin delicate leaves, each composed of three heartshaped leaflets, a beautiful bright green above, but of a purplish hue on their under surface. The long slender leaf-stalks are often reddish towards the base. The leaflets are usually folded somewhat along their middle, and are of a peculiarly sensitive nature. Only in shade are they fully extended: if the direct rays of the sun fall on them they sink at once upon the stem, forming a kind of three-sided pyramid, their under surfaces thus shielding one another and preventing too much evaporation from their pores. At night and in bad weather, the leaflets fold in half along the midrib, and the three are placed nearly side by side to ‘sleep,’ a security against storm and excessive dews.

The flowers, each set on long stalks, are fragile, in form somewhat like the Crane’sbills, to which they are closely allied, being bell-shaped, the corolla composed of five delicate white petals, veined with purple, enclosed in a five-scalloped cup of sepals and containing ten stamens, and in the centre, five green, thread-like columns, arising from a single five-celled ovary. At the base of the petals, a little honey is stored, but the flower seems to find favour with few insects. As the flower fades, its stalk bends towards the ground and conceals the seed capsule under the leaves, till ripe, when it straightens again. The case of the capsule is elastic and curls back when the fruit is quite ripe, jerking the seeds out several yards, right over the leaves.

A second kind of flower is also produced. These are hidden among the leaves and are inconspicuous, their undeveloped petals never opening out. The ripening and seed scattering processes of these self-fertilized cleistogamous (or hidden) flowers are the same as with the familiar white-petalled ones. Wood Sorrel droops its blossoms in stormy weather, and also folds its leaves. 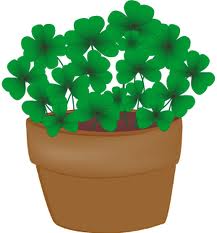 Neither the flowers nor any part of the plant has any odour, but the leaves have a pleasantly acid taste, due to the presence of considerable quantities of binoxalate of potash. This, combined with their delicacy, has caused them to be eaten as a spring salad from time immemorial, their sharpness taking the place of vinegar. They were also the basis of a green sauce, that was formerly taken largely with fish. ‘Greene Sauce,’ says Gerard, ‘is good for them that have sicke and feeble stomaches…and of all Sauces, Sorrel is the best, not only in virtue, but also in pleasantness of his taste.’

Both botanical names Oxalis and acetosella refer to this acidity, Oxalis being derived from the Greek oxys, meaning sour or acid, and acetosella, meaning vinegar salts. Salts of Lemon, as well as Oxalic acid, can be obtained from the plant.

An old writer tells us: ‘The apothecaries and herbalists call it Alleluya and Paniscuculi, or Cuckowes meat, because either the Cuckoo feedeth thereon, or by reason when it springeth forth and flowereth the Cuckoo singeth most, at which time also Alleluya was wont to be sung in Churches.

It flowers between Easter and Whitsuntide. By many, the ternate leaf has been considered to be that with which St. Patrick demonstrated the Trinity to the ancient Irish, though a tiny kind of clover is now generally accepted as the ‘true Shamrock.’ 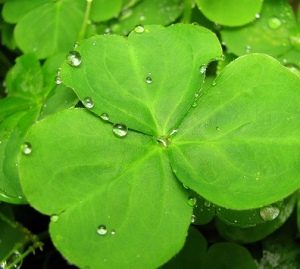 Medicinal Action and Uses: It has diuretic, antiscorbutic and refrigerant action, and a decoction made from its pleasant acid leaves is given in high fever, both to quench thirst and to allay the fever. The Russians make a cooling drink from an infusion of the leaves, which may be infused with water or boiled in milk. Though it may be administered freely, not only in fevers and catarrhs, but also in hemorrhages and urinary disorders, excess should be guarded against, as the oxalic salts are not suitable to all constitutions, especially those of a gouty and rheumatic tendency.

The old herbalists tell us that Wood Sorrel is more effectual than the true Sorrels as a blood cleanser, and will strengthen a weak stomach, produce an appetite, check vomiting, and remove obstructions of the viscera.

The juice of the leaves turns red when clarified and makes a fine, clear syrup, which was considered as effectual as the infusion. The juice used as a gargle is a remedy for ulcers in the mouth, and is good to heal wounds and to stanch bleeding. Sponges and linen cloths saturated with the juice and applied, were held to be effective in the reduction of swellings and inflammation.

An excellent conserve, Conserva Ligulae, used to be made by beating the fresh leaves up with three times their weight of sugar and orange peel, and this was the basis of the cooling and acid drink that was long a favourite remedy in malignant fevers and scurvy.

In Henry VIII’s time this plant was held in great repute as a pot-herb, but after the introduction of French Sorrel, with its large succulent leaves, it gradually lost its position as a salad and pot-herb.~