The sacred herb, Angelica, as its name alone implies, has a lofty status in the world of herbal lore.  I used this herb in my historical fantasy romance novel The Bearwalker’s Daughter, and my upcoming release, Traitor’s Curse. I’ve grown Angelica in the garden, a large aromatic plant with lacy white umbels, but it died out, so I replanted seedlings this spring. They took off, and I hope will survive the winter. Angelica makes a nice addition to a perennial herb and flower border, but be certain to allow plenty of room; it reaches a height of 4 to 6 feet. The flowers are also appealing to butterflies, another plus. 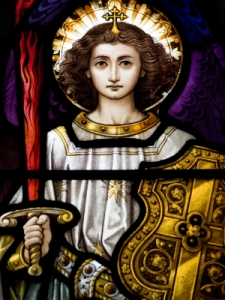 “According to one legend, (European-angelica) Angelica was revealed in a dream by an angel to cure the plague (hence the name Angelica or Archangel). All parts of the plant were believed effective against evil spirits and witchcraft. It was held in such esteem that it was called ‘The Root of the Holy Ghost.’

In America it was used by the Iroquois and other tribes as Witchcraft Medicine, an infusion of smashed roots were used as wash to remove ghosts from the house.”  This quote is from an interesting site called Alternative Nature Online Herbal.  You can also view lovely pics of Angelic there.

From Real Magick: Magickal Use and Lore: 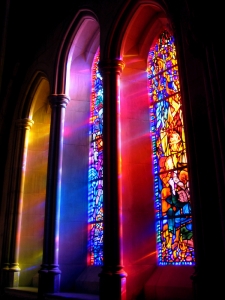 “As seen by its name, angelica has been associated with the Archangel Michael. It comes into bloom near his feast day and has been connected to the Christian observance of the Annunciation. Angelica is known for its protection against evil spells.”

From Rodale’s Illustrated Encyclopedia of Herbs: “Throughout history angelica has been a standout herb…supposed to ward off evil spirits and witches.  Peasants would weave necklaces of the leaves for their children to wear to protect them. The juice of the roots was used to make Carmelite water, considered a ‘sovereign remedy’ and drunk to endure a long life and to protect against the poisons and spells of witches.”

Here I want to point out that the hysteria over witchcraft peaked in the Middle Ages, but endured well beyond.  How many unfortunates were burnt at the stake as a result of witch hunts is uncertain but they numbered in the thousands.  Most confessions were gained as the result of torture, although the suggestion has been made that the side effects of some potent herbs made people think they could actually fly and that they possessed special powers.  And who’s to say that some individuals didn’t have special powers.  But once condemned, few were powerful enough to keep themselves from a bad end.  Note that no witches were ever burned in North America, not even at the Salem Witch Trials.  By then, hanging was the preferred method of execution, far more civilized.  Burning was so sixteenth century.

From A Modern Herbal: (Bear in mind that this was written in the early 20th century, so not all that ‘modern.’  Ms. Grieve has a great deal to say about Angelica–I’ve touched on portions.)

History: Its virtues are praised by old writers, and the name itself, as well as the folk-lore of all North European countries, testify to the great antiquity of a belief in its merits as a protection against contagion, for purifying the blood, and for curing every conceivable malady: it was held a sovereign remedy for poisons agues and all infectious maladies.

The author goes on to say, “After the introduction of Christianity, the plant became linked in the popular mind with some archangelic patronage, and associated with the spring-time festival of the Annunciation. According to one legend, Angelica was revealed in a dream by an angel to cure the plague. Another explanation of the name of this plant is that it blooms on the day of Michael the Archangel (May 8, old style), and is on that account a preservative against evil spirits and witchcraft: all parts of the plant were believed efficacious against spells and enchantment. It was held in such esteem that it was called ‘The Root of the Holy Ghost.’

Angelica is unique amongst the Umbelliferae (*which means plants with umbel shaped flowers, think Queen Ann’s Lace) for its pervading aromatic odour, a pleasant perfume, entirely differing from Fennel, Parsley, Anise, Caraway or Chervil. One old writer compares it to Musk, others liken it to Juniper. Even the roots are fragrant, and form one of the principal aromatics of European growth- the other parts of the plant have the same flavour, but their active principles are considered more perishable.

Cultivation: Cultivate in ordinary deep, moist loam, in a shady position, as the plant thrives best in a damp soil and loves to grow near running water.

Parts Used: The roots and leaves for medicinal purposes, also the seeds. The stems and seeds for use in confectionery and flavouring and the preparation of liqueurs.  The dried leaves, on account of their aromatic qualities, are used in the preparation of hop bitters.  Angelica roots should be dried rapidly and placed in air-tight receptacles. They will then retain their medicinal virtues for many years. 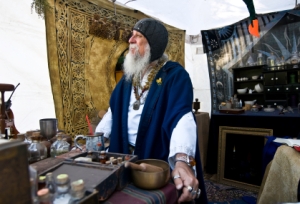 Angelica is a good remedy for colds, coughs, pleurisy, wind, colic, rheumatism and diseases of the urinary organs, though it should not be given to patients who have a tendency towards diabetes, as it causes an increase of sugar in the urine.  It is generally used as a stimulating expectorant, combined with other expectorants the action of which is facilitated, and to a large extent diffused, through the whole of the pulmonary region.  It is a useful agent for feverish conditions, acting as a diaphoretic.

An infusion may be made by pouring a pint of boiling water on an ounce of the bruised root, and two tablespoonsful of this should be given three or four times a day, or the powdered root administered in doses of 10 to 30 grains. The infusion will relieve flatulence, and is also of use as a stimulating bronchial tonic, and as an emmenagogue…used for indigestion, general debility and chronic bronchitis. For external use, the fresh leaves of the plant are crushed and applied as poultices in lung and chest diseases.

The following is extracted from an old family book of herbal remedies:

‘Boil down gently for three hours a handful of Angelica root in a quart of water; then strain it off and add liquid Narbonne honey or best virgin honey sufficient to make it into a balsam or syrup and take two tablespoonsful every night and morning, as well as several times in the day. If there be hoarseness or sore throat, add a few nitre drops.’

Angelica stems are also grateful to a feeble stomach, and will relieve flatulence promptly when chewed. An infusion of Angelica leaves is a very healthful, strengthening tonic and aromatic stimulant, the beneficial effect of which is felt after a few days’ use.

The yellow juice yielded by the stem and root becomes, when dry, a valuable medicine in chronic rheumatism and gout.

Taken in medicinal form, Angelica is said to cause disgust for spirituous liquors.  (*It occurs to me that this might be beneficial to alcoholics). It is a good vehicle for nauseous medicines and forms one of the ingredients in compound spirit of Aniseed. Gerard, among its many virtues that he extols, says ‘it cureth the bitings of mad dogs and all other venomous beasts.’~ 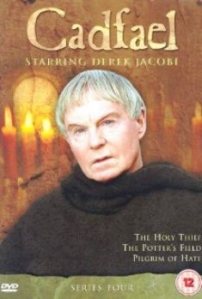 Cadfael, starring  Derek Jacobi, is a fascinating mystery series set in the old Norman England town of Shrewsbury featuring a Crusader turned monk, skilled in the use of herbs and solving murders.  A healer atoning for the lives he took as a soldier, Brother Cadfael is often in his herborium at the monastery, busy with his mortar and pestle or distilling some potent elixir.  Dried herbs hang in bunches from the rafters overhead, fill baskets and shelves alongside glass vials, crocks and other medicinal vessels made of pottery… kewl stuff.  He also loves to be among the herbs in his garden.  But mysteries often summon him from these simple joys.

The opening theme features sacred Medieval music, haunting voices from ages past.  The show is available at netflix, some in instant streaming.  Listen to the clip below…intriguing.