‘The sky has finally fallen. Always knew it would,’ & Other Eeyore Observations

“Owl flew past a day or two ago and noticed me. He didn’t actually say anything mind you, but he knew it was me. Very friendly of him, I thought. Encouraging.” ~Eeyore

“If it seems as though you haven’t ‘felt at all how’ for a long time, look behind  you. It could be that your tail is missing.” ~

“When your tail is missing, Remember you have every right to Mope.”~

“Having your tail recovered is well and good, but remember that it will have to be reattached.  With a hammer and a nail.” ~

“Use caution when standing by the river bank minding your own business. You might get bounced into the water.”~

“When stuck in the river, it is best to dive and swim to the bank yourself before someone drops a large stone on your chest in an attempt to hoosh you there.”~

“No Give and Take.  No Exchange of Thought. It gets you nowhere, particularly if the other person’s tail is only just in sight for the second half of the conversation.”~

“Good morning, Pooh Bear,” said Eeyore gloomily. “If it is a good morning,” he said. “Which I doubt,” said he.

“Can’t all what?” said Pooh, rubbing his nose.

“Gaiety. Song-and-dance. Here we go round the mulberry bush.”~

“Very interesting,” said Eeyore. “I suppose they will be sending me down the odd bits which got trodden on. Kind and Thoughtful. Not at all, don’t mention it.”~

“I might have known,” said Eeyore. “After all, one can’t complain. I have my friends. Somebody spoke to me only yesterday. And was it last week or the week before that Rabbit bumped into me and said ‘Bother!’. The Social Round. Always something going on.”~ 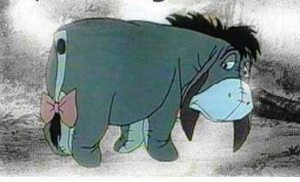 “Yes,” said Eeyore. “However,” he said, brightening up a little, “we haven’t had an earthquake lately.”~

Eeyore walked all round Tigger one way, and then turned and walked round him the other way. “What did you say it was?” he asked.

“Ah!” said Eeyore again. He thought for a long time and then said: “When is he going?”~

“Could you ask your friend to do his exercises somewhere else? I shall be having lunch directly, and don’t want it bounced on just before I begin. A trifling matter, and fussy of me, but we all have our little ways.”~

“I thought,” said Piglet earnestly, “that if Eeyore stood at the bottom of the tree, and if Pooh stood on Eeyore’s back, and if I stood on Pooh’s shoulders -”

“And if Eeyore’s back snapped suddenly, then we could all laugh. Ha Ha! Amusing in a quiet way,” said Eeyore, “but not really helpful.”

“Would it break your back, Eeyore?” asked Pooh, very much surprised.

“That’s what would be so interesting, Pooh. Not being quite sure till afterwards.”~

“Eeyore, what are you doing there?” said Rabbit.

“I’ll give you three guesses, Rabbit. Digging holes in the ground? Wrong. Leaping from branch to branch of a young oak tree? Wrong. Waiting for somebody to help me out of the river? Right. Give Rabbit time, and he’ll always get the answer.”~

“You don’t always want to be miserable on my birthday, do you?”~

“They’re funny things, Accidents. You never have them till you’re having them.”~

“Hitherto, all the Poetry in the Forest has been written by Pooh, a Bear with a Pleasing Manner but a Positively Startling Lack of Brain. The Poem which I am now about to read to you was written by Eeyore, or Myself, in a Quiet Moment. If somebody will take Roo’s bull’s eye away from him, and wake up Owl, we shall all be able to enjoy it. I call it – POEM.”~

“A little Consideration, a little Thought for Others, makes all the difference.”~

“That Accounts for a Good Deal,” said Eeyore gloomily. “It Explains Everything. No Wonder.”

“You must have left it somewhere,” said Winnie the Pooh.

“Somebody must have taken it,” said Eeyore. “How Like Them,” he added, after a long silence.~

“I’m not asking anybody,” said Eeyore.  “I’m just telling everybody. We can look for the North Pole, or we can play ‘Here we go gathering Nuts in May’ with the end part of an ants’ nest. It’s all the same to me.”~

“I’m telling you. People come and go in this forest, and they say. ‘It’s only Eeyore, so it doesn’t count.’

They walk to and fro saying ‘Ha Ha!’. But do they know anything about A? They don’t. It’s just three sticks to them. But to the Educated – mark this, little Piglet – to the Educated, not meaning Poohs and Piglets, it’s a great and glorious A. Not,” he added, “just something that anybody can come and breathe on.” Piglet stepped back nervously, and looked round for help.~

“This writing business. Pencils and what-not. Over-rated, if you ask me. Silly stuff. Nothing in it.”~

“I like the puffy white clouds. Aren’t they… that is… oh, my goodness. They’ve turned grey.” ~Winnie the Pooh

9 responses to “‘The sky has finally fallen. Always knew it would,’ & Other Eeyore Observations”