“To be awake is to be alive.” ~Thoreau

Henry Thoreau said of Walden Pond,”A lake is the landscape’s most beautiful and expressive feature. It is Earth’s eye; looking into which the beholder measures the depth of his own nature.”

Thoreau lived in a small cabin at Walden Pond for two years where he did some of his best writing and learned the essentials of life. 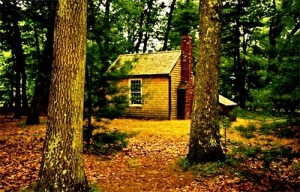 “Henry wanted to write, and needed a quieter place than the Thoreau household to do this. And he did write both A Week on the Concord and Merrimack Rivers and an early draft of Walden in his two years at the pond. But in Walden’s “Where I Lived, & What I Lived for,” he describes an additional motive. “I went to the woods because I wished to live deliberately, to front only the essential facts of life, and see if I could not learn what it had to teach, and not, when I came to die, discover that I had not lived.”

In conclusion, Thoreau said, “I learned this, at least, by my experiment; that if one advances confidently in the direction of his dreams, and endeavors to live the life which he has imagined, he will meet with a success unexpected in common hours.”

*Image of Walden Pond and a replica of Thoreau’s cabin 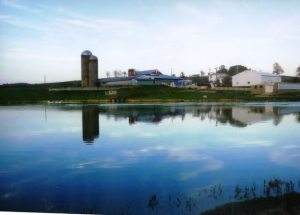 Thoreau isn’t the only one who loved a pond.  I’m deeply fond of ours. Although Walden Pond is rather larger than our farm pond, more of a lake really, and heavily wooded.  Grassy meadows and corn fields surround our pond, but wooded hills rise above the fields, and beyond these, on a clear day, you can see the Alleghenies. 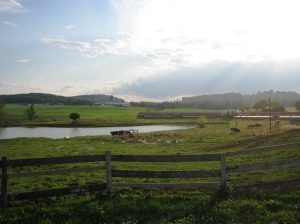 I could not write all that I have without this marvelous  ever-changing scene around me.   And the pond plays host to many birds and waterfowl.  Overhead, swifts, swallows, and purple martins skim and dive in pursuit of the insects we are very glad for them to devour.  The swifts gathered in mass and departed early in the fall two years ago when we had a bad winter.  Which I predicted from this event. 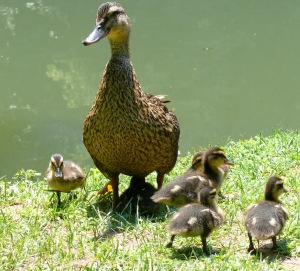 But back to the water, most interesting to me is that you never know what waterfowl might be swimming on it.  Migrating ducks of all sorts have stopped by, and I do love ducks.  The most common, of course, are the mallards.  Wood ducks nest in the tangle of trees growing along the edge of the meadow in a dry creek bed that runs with water when the heavy rains come.  Each spring finds the wood duck mammas on the pond with their babies darting over the water like little bumblebees.

Our barn yard geese make daily treks down to the water.  And flocks of Canadian geese are not uncommon.  The great blue heron can be seen in the early morning mist fishing along the banks.  Sandy brown killdeer dart around the edges of the pond on their long legs, sounding that wild funny cry peculiar to them.   On one snowy day a flock of swans took respite from their journey.   Snow geese wintered with us one year.  Our most unusual visitor was a pink flamingo, though his rosy color had faded from lack of the shell fish that generally make up a flamingo’s diet and gives them that brilliant hue.  I suppose if you fed them lots of carrots they’d turn orange.

An excerpt from my nonfiction book, Shenandoah Watercolors:

Dozens of swallows skim over the pond as the sun sinks below the Alleghenies. If I were standing on a distant ridge, would it sink behind me, or the ridge beyond that one?

The water is calm now but was awash with waves during the storm that hit a short time ago. The grassy hill and maple tree are reflected on the surface, silvery and streaked with rose from the western sky. All is peaceful as a soft twilight settles over the valley. Utterly idyllic, until I pause to consider what all of those swallows are after. There must be clouds of mosquitoes.

Here’s another thought, where do all the birds spend the night? Are the woods up on the hill lined with birds perched wing to wing jostling for space on the branches? I’ll bet they make room for the big red-tailed hawk. He gets the whole tree––as many as he wants. It’s good to be king.~

*Images of our pond by my mom and daughter Elise