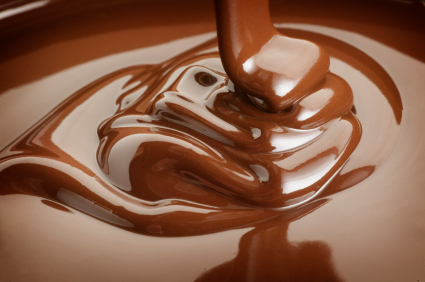 From Coffee, Tea, and Chocolate in Colonial America: “Colonial Americans quickly adopted the taste for these imported beverages(*coffee, tea, and chocolate) and their fashionable equipage. Colonial coffeehouses, following the London model, became powerful social catalysts, providing an excellent forum for the exchange of ideas and the distribution of news. All three beverages were also consumed in the home, where fine silver and ceramic vessels were especially valued. American silversmiths emulated English and Continental styles.”

“Chocolate, always expensive, was taken at breakfast by fashionable society. Chocolate pots differ from coffeepots in that their covers are made with a hinged or removable finial to accommodate a molinet (stirring rod). Thick with cocoa butter, the beverage needed to be milled prior to pouring.”

*I discovered a wonderful chocolate site/store.  American Heritage Chocolate, a historic division of Mars, will definitely find a new customer in me.

From American Heritage Chocolate: “Chocolate figures prominently in Early American history. With a rebellion against tea and everything British, our forefathers proudly chose hot chocolate and coffee drinks as symbols of freedom. Thus began chocolate’s uniquely American journey of good taste. Cocoa and chocolate sold in early 17th and 18th century North America were not in the form of candy bars. Chocolate at that time was prepared as a beverage to be drunk at meal times, sometimes for breakfast, other times for afternoon dinner or evening supper.~

American Heritage Chocolate is handcrafted chocolate inspired by an authentic colonial recipe – made with all-natural ingredients and no preservatives. American Heritage Chocolate products are sold in gift shops in historic sites in the U.S., including Colonial Williamsburg, Mount Vernon, Historic Deerfield, the Smithsonian, and Fort Ticonderoga. Products are also available in Canada, exclusively from the Fortress of Louisbourg.

Recipes (Their cookbook):  Travel back in time with authentic recipes uncovered by our historians. See the recipes as they were written hundreds of years ago…then try the easy-to-follow modern day translations, as reproduced and tested by our expert historians. Here’s living proof that good taste is timeless.”~

From: The Candy Professor: A Review Of American Heritage Chocolate~ 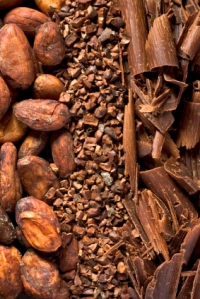 So this is Mars version of the “heritage chocolate”: dark chocolate, about the sweetness of semi-sweet baking chips. But more gritty, you definitely notice the coarser grind of the chocolate. There is also a strong spicy flavor: chile and cinnamon, primarily.  Did colonial chocolate taste spicy?  Many different flavors were added to chocolate in the 18th century: amber, musk, pepper, cloves, and vanilla are among the various flavorings mentioned in 18th century recipes. For the particular combination in American Heritage Chocolate, the  researchers imagined what other sorts of spices might have been ground on the chocolate stone, giving the chocolate extra flavors when it was ground.

The other think I notice about this historical chocolate is that it sort of crumbles in your mouth, rather than the mooshy melty mouth feel of expensive modern chocolate. Modern chocolate is carefully tempered, repeatedly warmed and cooled within very precise parameters. This what gives chocolate its velvety texture. The colonial chocolate makers didn’t temper their chocolate, so the heritage chocolate is more brittle.”~

“Chocolate was an ingredient for many colonial and modern dishes. Colonial Williamsburg is exploring historic chocolate in a seasonal programs in the Historic Area highlighting the 18th-century methods for producing and consuming chocolate. 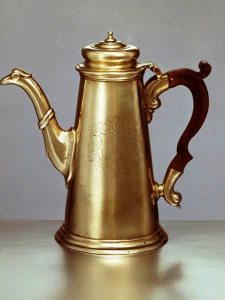 Chocolate was made primarily to be served as a hot beverage, the drink of choice to pair with breakfast. Chocolate, along with coffee and tea, was considered a “necessity” in the colonies and could be found everywhere in the 18th century.

The first recorded mention of chocolate in Williamsburg dates to the first decade of the 18th century, when College of William and Mary President James Blair noted serving hot chocolate to visiting Burgesses. 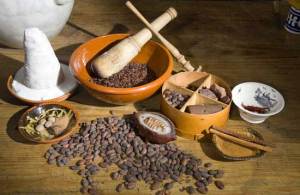 Store, Raleigh Tavern Bakery and Williamsburg Revolutions in Colonial Williamsburg’s Visitor Center. American Heritage Chocolate has been designed and developed as closely as possible to 18th-century chocolates eaten and consumed as a drink for pleasure and used by the armies as rations. The American Heritage line includes an authentic chocolate drink mix, chocolate sticks and chocolate bars and is also sold at Historic Deerfield, Fort Ticonderoga, Mount Vernon, Monticello and Fortress Louisbourg. It meets 21st-century manufacturing standards.”~ 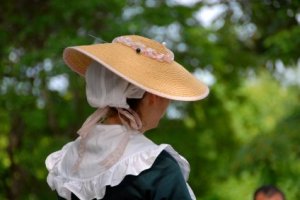 9 responses to “Chocolate in Colonial America”